Animal Crackers - A Bed of Hay?

Well I guess if you have the opportunity to snuggle in to a large bed of hay then why not? 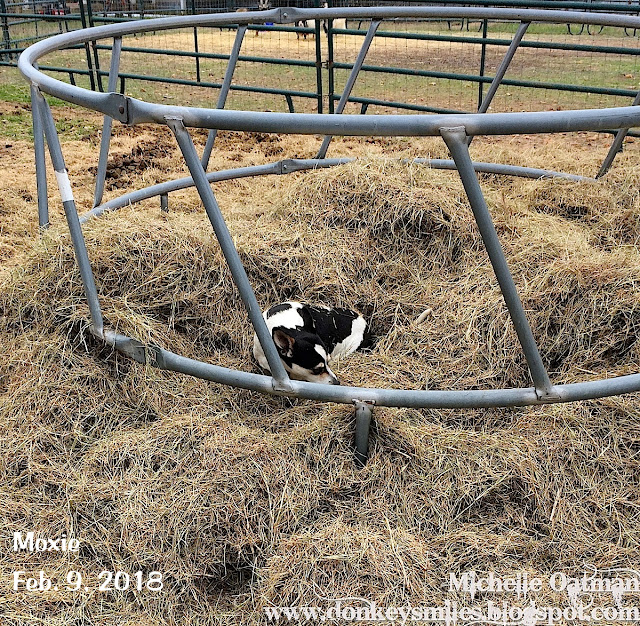 Hubby was coming up our driveway and found what was left of the large donkeys bale of hay was being occupied by someone! Moxie had climbed into the bale ring and made herself quite comfortable don't you think?

She was so cute and so asleep she didn't even notice hubby there... well until he said her name... 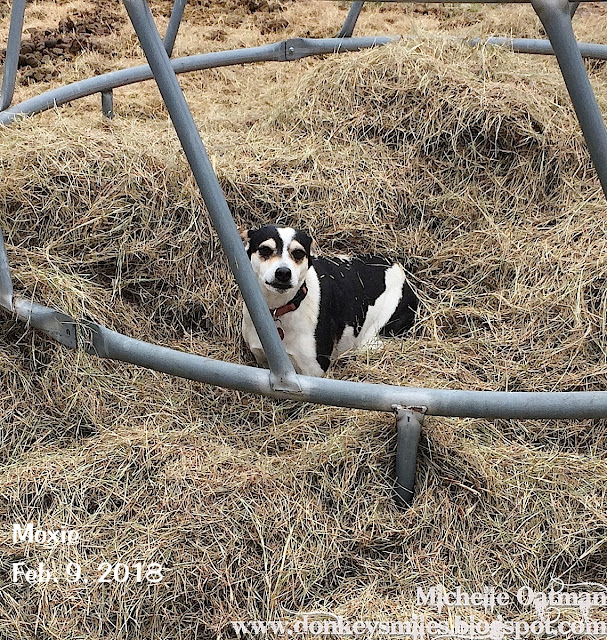 That little grin.. is just too much. She was quite happy in her bed of hay. Such a sweet girl.

Now I have shown you Libbie in her bed many times... especially her new bed she got a couple of months ago. She loves that bed. We have one in the front of the house and a second in the bedroom so she can be comfortable and be near us... well the other morning I came down the hall and found a couple of boxes Hubby had left on the floor. And it looks like someone else found them as well. 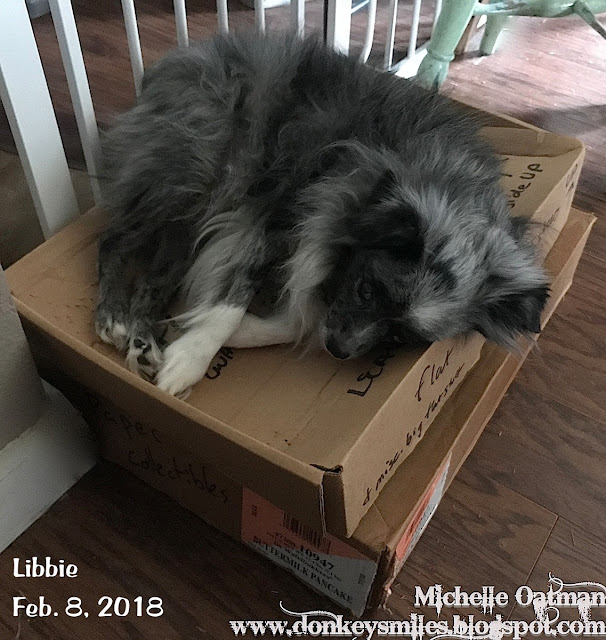 Now the cat yes.. she loves laying on boxes. But now Libbie?? It doesn't look nearly as comfortable as her fancy cushioned bed. But well I guess she is happy she didn't move an inch when I asked why she was up there.

This photo popped up on my screen.. it is one I took a couple of weeks ago and didn't use. But when I saw it again I just kind of well... laughed out loud. 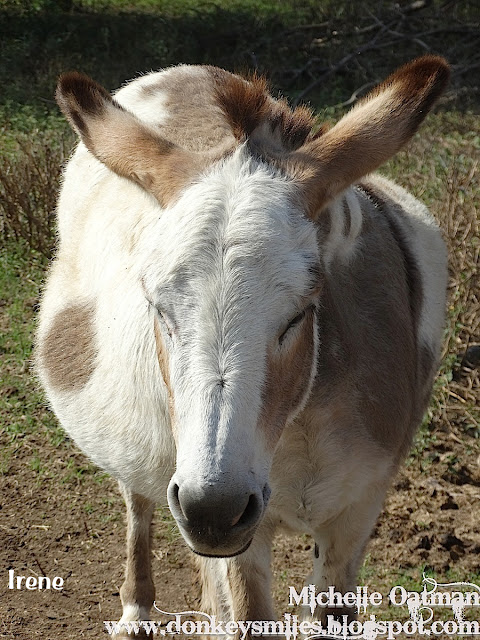 Irene.. she was asleep. Now we don't want to say that she is a little on the pudgy side... a bit lumpy? But well she is. LOL This photo and the angle of it well it really makes things look larger than they are. Or are they? Ok.. she is a heavy girl.

And we have a bit of a heavy boy here.. a BIG boy. 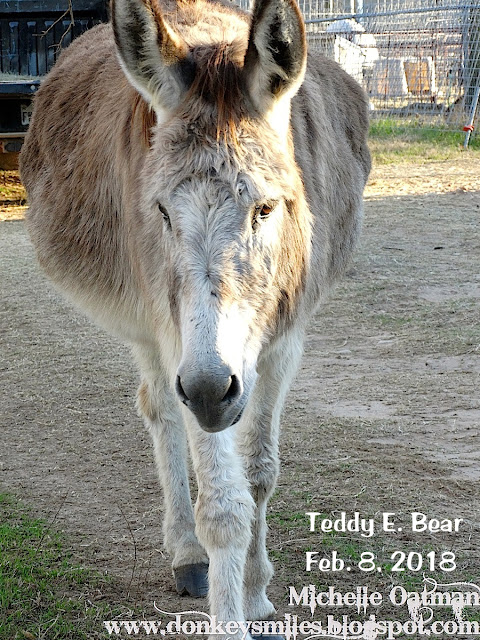 Our standard Teddy is a little on the chunky side too. Heck all my kids eat well what can I say - but it is all hay and grazing and no grain or treats.. well no treats very often :0)   But what can I say they are loved  -

And then we end up with Wyatt... why I guess he just wanted to stop and say hi and be the last photo of the day! 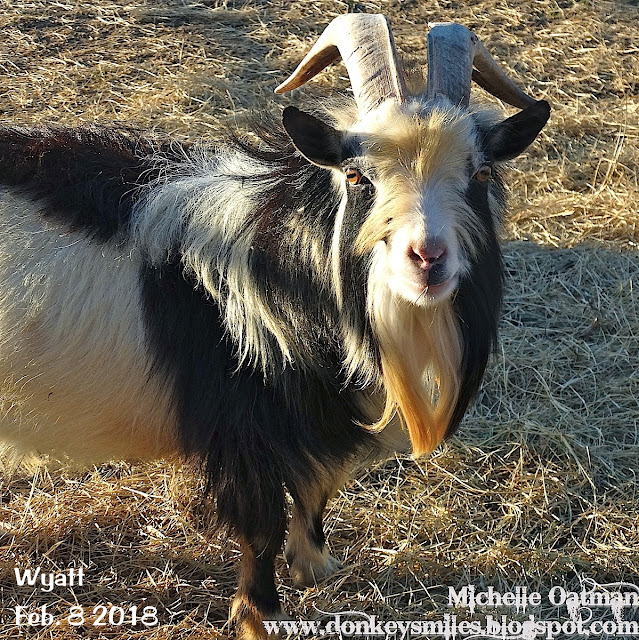 Handsome guy even if he smells a bit.

Have a wonderfully blessed weekend - enjoy some furry or feathered friends.
HUGS and

Good Morning from Cold and Snowy Iowa! Moxie looks so comfy, I want to climb in there with her. I think Libbie hangs out with Gato too much and thinks she is cat sometimes... LOL . Cute as ever. See you next week.

too cute! Moxie definitely knows where the warmest and most comfortable place to snooze is...don't know that I would say that about Libbie tho...those boxes don't look comfortable at all. Love seeing the pictures of your fur babies...love to see them on the pudgy side. I think it shows you take care and love them! Have a great week. Vickie

Love the donkey pics, regardless of their... er, girth ;-) And I wonder if Libbie liked the boxes because they smelled like Dad. One of my boys will sometimes pick the last thing my hubby handled before going to work to run off with, rather than his shoes or other things that should have a more... potent, smell. My other boy is terrified of boxes, especially when they come in from UPS or Fedex and he can still smell the driver heavily on them. It can take a week before he will walk near it and stop swerving around it as if it has a bomb in it! LOL What's funnier, is his dog food is delivered via UPS, and he is just as frightened of it despite the fact he can smell the food. The other dog loves the smell of that box!!! Anyway, it was just a thought since it doesn't look comfortable at all :-) Btw, love the line "Handsome guy even if he smells a bit." Ah, that line can be used around my house too, and I don't even have a goat!!! LOL