This week we got a "little" surprise. Now you may remember our stray kitten that showed up months ago, Tuxedo, as we named her. She lives in the goat pen and seems happy there... a while back Hubby came in and said I think Tuxedo is pregnant... and I answered "How?!!" Yeah you can imagine the look I got. But then we remembered months ago we had a day or so where we saw another cat... then never again. Hubby said it was a male ... and well I guess it was. This week I was called outside to see a surprise... This is what I saw out in the goat pen as I came off the back porch. 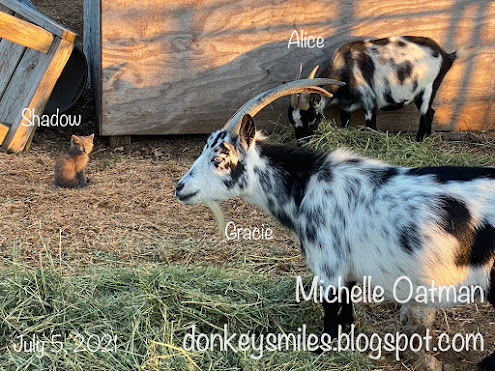 Tuxedo's surprise is the cutest little kitten... we have named him "Shadow" I am sure his Momma will be teaching him to live cautious and in the shadows of the goats. That is how she has stayed safe, and well hid her little baby for so long. The goats seem to have accepted the new little creature,  just as they did Tuxedo.

I didn't get a photo of Tuxedo this week, as soon as she sees me she bolts for cover. So here is one photo I did get a while back. 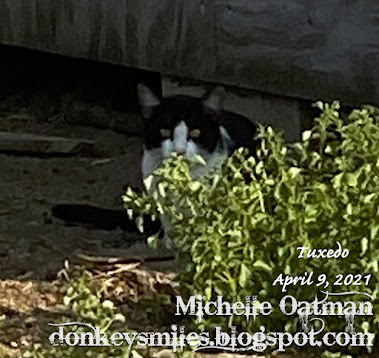 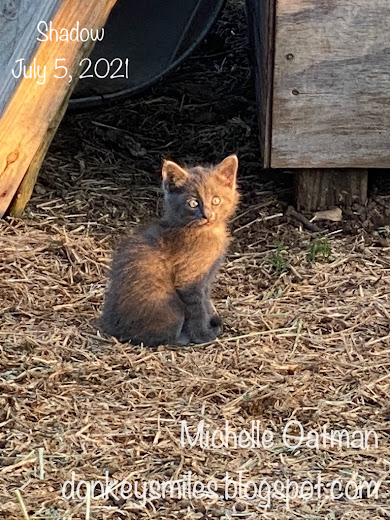 It was really adorable when Hubby went into the pen to see if Shadow would let him get close. 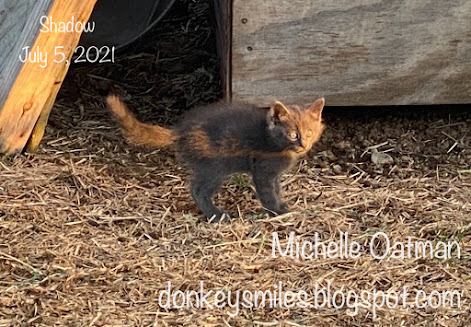 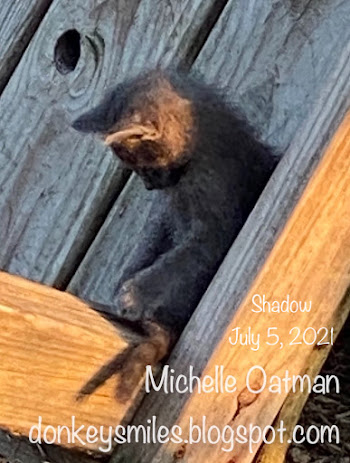 We stood out there quite a long time watching this little guy. Hopefully in time he will be a little friendlier than his momma. And we won't let them know that soon they will both be trapped and taken to be fixed to help keep the population under control. They will be brought back and left to live with their family, the goats.
Gato isn't worried about the new competition... She knows we wouldn't bring anyone else inside to live with her... but mainly to live with Libbie. Nope Libbie wouldn't allow that. 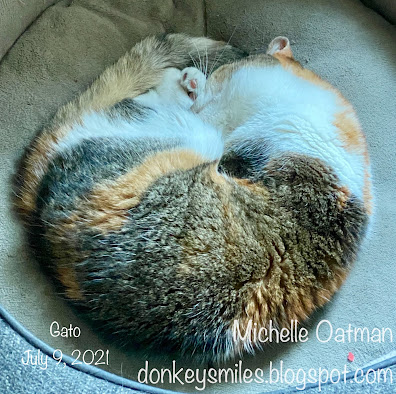 Now the weather here has been unseasonably cooler than normal. Sorry I know those of you in the Northwest are roasting in the heat that you are not use to. Here this week the last few days we have barely made 80 degrees. And cloudy rainy weather as well. Loving that!
Louise not happy.. well the cooler weather yes, the rainy.. no. You know goats... they melt in the rain. 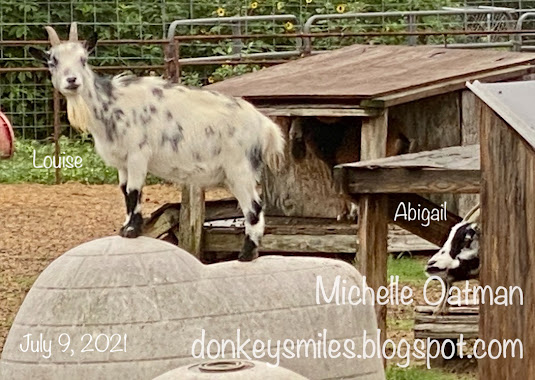 Well at least they think that... and express it loudly as well. The ground is wet!!!!
The only really great donkey photo I got this week was Valentine. My standard boy. 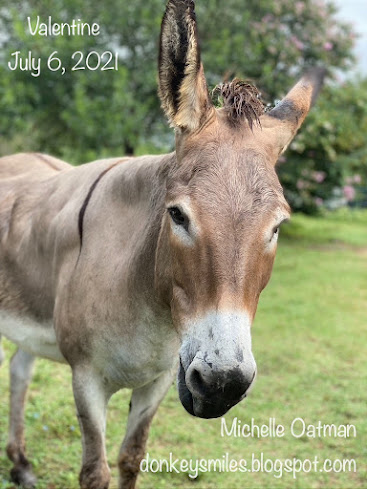 Some days you get a quick hello while he is passing, to food usually, or just following his Mom Cocoa. But the other day I got out of the car and he came right up to the door and stood there, I took advantage and loved all over him. Ok he was wet from the rain, so I became a mess as well. But I love the days he wants attention. Such a handsome guy. Wet and dirty and still a handsome guy!

Hope you got a smile again this week and that you enjoyed our little surprise this week as well.
Have a blessed weekend -
HUGS and

Congratulations. He is beautiful and glad your going to keep him.

Aww a baby! Kittens are so much fun to watch. Tuxedo may be cautious but certainly a goof Mom. Your cooler weather sounds nice. Have a great week.