Animal Crackers - It's Green in August??

Howdy
Hard to believe it looks like this in August! August is Brown... not Green! No complaining we have been so blessed this year with rain, and everyone is loving it! I tell Hubby all the time that the front pen is one of the most peaceful views I can dream of. 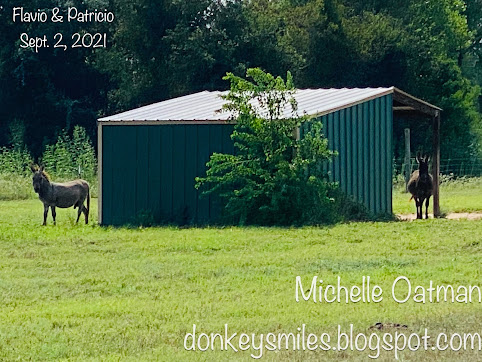 With his new mower he has been able to mow it easier and it comes out so gorgeous! The guys are loving it - We were out yesterday morning and were on the opposite side of the pen than we are normally, and I think it had Flavio and Patricio a bit confused.. I called out to Diego and Miguel trying to get all four of them in a photo. But those two had already settled into the shed and were taking their nap - It is a peaceful view isn't it? If we had a swing or hammock out there I think I could have taken a nap too!
Had to go into the goat pen and protect Chloe yesterday morning. Dad was getting ready to feed and Red was being mean to Chloe our old lady.. poor thing. I ran off Red and loved all over the old boney girl. Then went off to visit with some of the other ladies. Now honestly most of them were following Dad and didn't care beans about me. But I found a few that stood pretty for me. Miss Alice is always a looker - 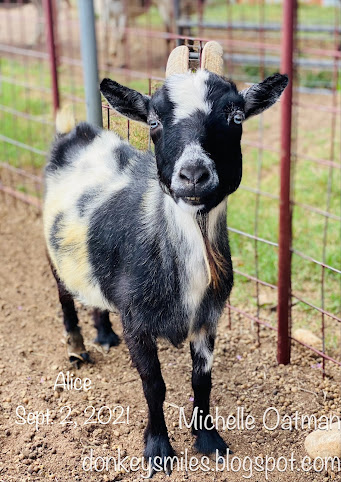 I thanked her for being so sweet and not running off - She is so pretty. Not quite as wide as most of the other ladies but she is calmer and not as pushy and piggy.
Then I found Olive Oil. Now she was really concentrating on watching where Dad was every minute. No point in running and leaving her shady spot until that very moment her Alfalfa breakfast hits the ground you know - 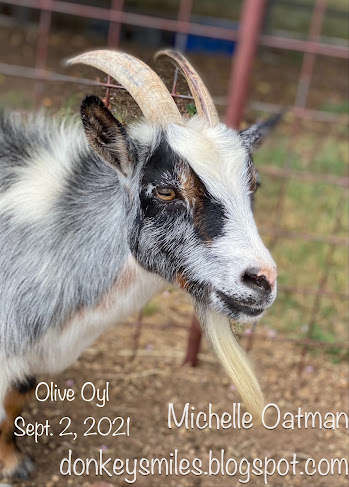 It was so funny I was talking to her, making kissing noises, whistling and working so hard to get her attention to get a front view photo. But nope she wouldn't look at me for nothing! I understand... I get that way in a good restaurant when my meal is making its way from the kitchen to the table.
Then I heard some snorting and Hee Haws from next to the goat pen. The Lady Donkeys were making sure that Dad knew they were there and would like some breakfast too. Look at that stare from Ellie Mae! 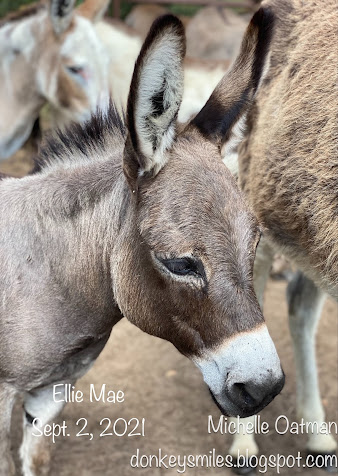 Now they don't get hay every day right now. There is just too much yummy grass out there for them to chow on. But two or three days a week they get hay. Funny I would think the fresh green grass would be better, but they do love that hay as well.

As Dad was throwing breakfast over the fence and into their pen I got a brief pause from Patti. She's a sweet old lady that knows how much Mom likes her photos - 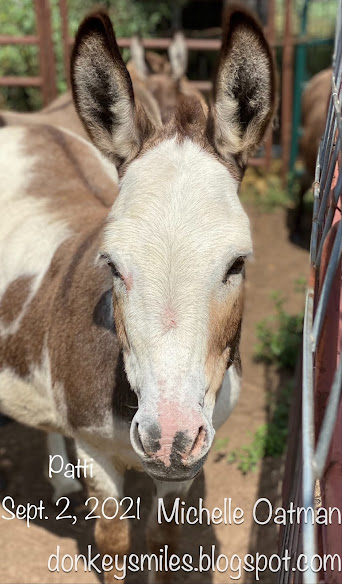 Now a bit of bad donkey story - I am sure you may remember my life size aluminum donkey that is our back yard. His name is Hombre - he is looking a bit "antique" now in the weather. I love him so much. A gift from Hubby years ago. He weighs a ton. Never moves, hubby just runs the weed-eater around him and he stand there looking so handsome. 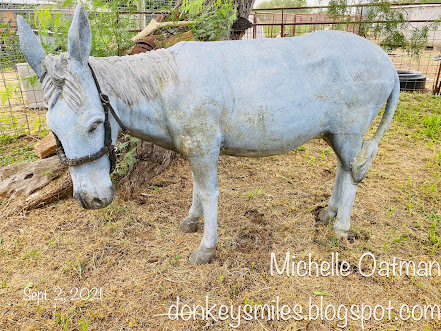 Well the other morning we came out the back door first thing in the morning and the gate was open, there were three standard donkeys munching down on things... and Hombre looked like this... 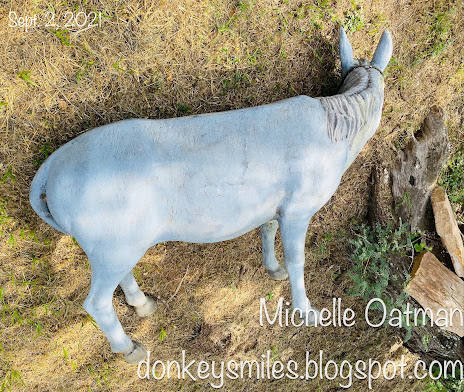 Now why they felt the need to knock him over I have no idea. He wasn't standing in a really grassy area, but my guess would be scratching their head or rear end on him and all though he weighs a ton to me... compared to them he is a light weight and fell right over. BAD big donkeys! And Dad wasn't too happy about them munching on the hay bale in the back yard or his plants. Oh they got yelled at and a clap of the hands to get them back out the gate. But then Dad got their breakfast hay, fed them and loved all over them. Spoiled and Loved.
Hope you enjoyed this week - Hug your furry and feathered family members -
HUGS and

Happy Labor Day weekend. Your grass is greener than the grass here in Eastern IA !!! We did get about and inch over the last 5 days, Hoping for more.

Hi Michelle. Isn't it hard when one of your animals is being mean to the other? You love them all, but sometimes ... I had four large dogs at one point in time and one of them was mean to the others sometimes, but as sweet as could be to me all the time. It was always so hard to yell at him not to be mean to the others while he looked at me with such sad eyes because I was yelling at him. I used to hate those moments! Glad it didn't happen often! I don't live on a farm, but I still enjoy the green grass on our front and back yards and those of my neighbours in our neighbourhood :-). But then, I would be happy if we had Summer all year 'round :-) I do love the colours of Fall though. I hope you all have a wonderful and safe holiday weekend.
Lena xx