Went out late yesterday afternoon to see all the kids... Penelope was feeling especially friendly and came up so fast to the fence for her head scratches - this was the first photo I snapped. Too late she was right up on me! LOL 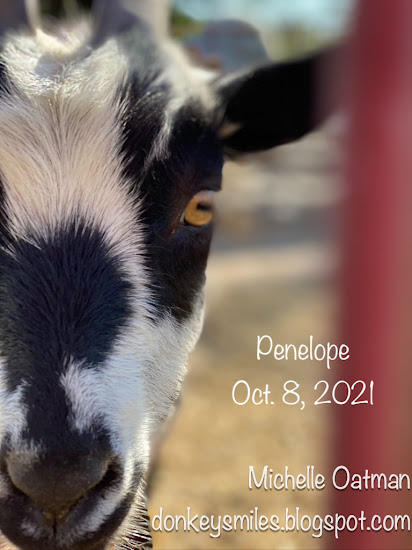 She is such a pretty little girl. Still hangs by her Mom's side. Although her Mom won't run up to me, she is very skittish. So glad her daughter isn't and likes to come for her lovings - I then asked her to back up for a full face photo. She wasn't liking it, wanted the close up attention. I would back up... she came forward over and over... This was a far back as I could get her - but it does show off how beautiful she is right? 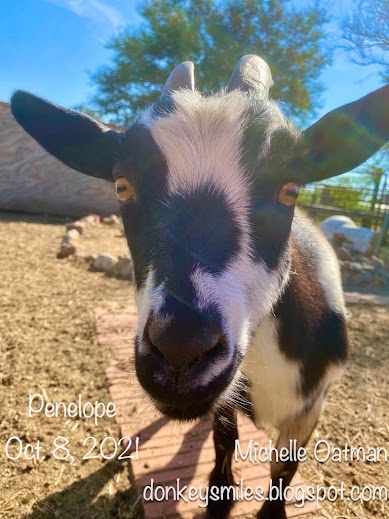 Then Alvin was making noises in his private pen, so I went to visit him. 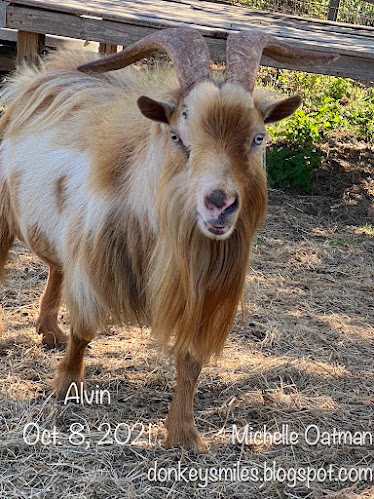 OH my HOLY SMOKES!! Talk about stinky! EWEEWE! I scratched the very top of his head between his horns... we had a talk about the fact that he had let a bird poop on his head... We will let Dad take care of that cuz with just touching him with one finger I had to run straight into the house and scrub... smell was so bad loosing the finger was a consideration. But I scrubbed hard enough to save it! HA! He is so sweet.. but he is a "MAN" Goat! Whew!

Went back out to visit my old man Black Jack - 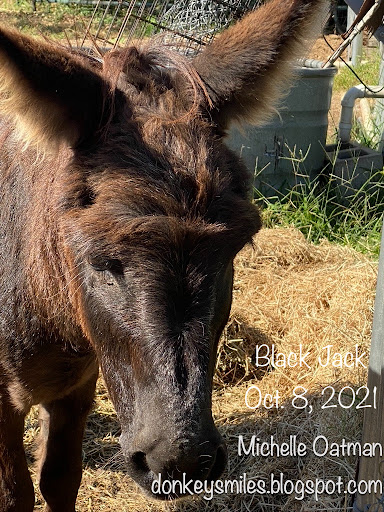 A little over a month ago I wasn't sure he was going to make it very long. He was so so so skinny and wasn't walking well. But "Dad" has really been strict about getting him his geriatric old people food and vitamins and he is a totally different old man! I sit inside at the computer working during the day and can hear him yelling out to the Ladies pen. Makes me smile, as for a long time he wasn't making any effort to talk like his normal self. And now He trots to the fence for attention. He is doing so good! Hubby and I are so so so happy!

Heading back to the house I had to stop and laugh at Scarlet "Red" - She was under one of the trees enjoying the shade, I laughed and told her that her eyes and red fur was glowing in the filtered light in the shade... 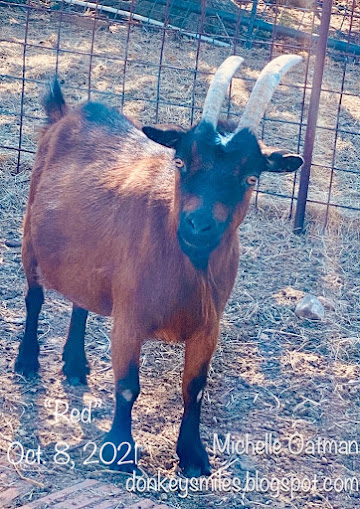 She just stood and stared at me... Like what was I laughing at? Then she came over in the sun light and we had a good rub down her face and neck. She does love neck rubs!

Have a little correction on the kittens... 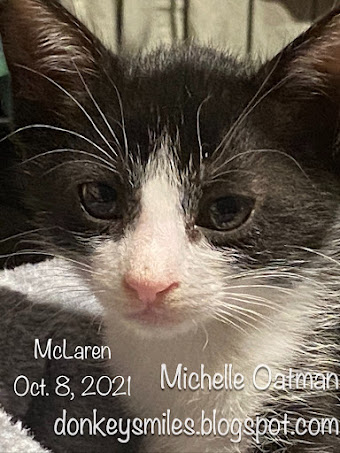 McLaren was introduced as a little boy - they were so tiny and crazy, we got a little mixed up - now that they are letting us cuddle and hold them calmly we have found that McLaren is actually a little girl.... and Mercedes is a little boy! Things have become clearer as they are getting calmer and older. LOL The four of them are such time wasters! I loose way too much time watching and playing with them! They are so cute! This week their Mom, Tuxedo, and older brother, Shadow, are scheduled to trap up and take in to be fixed. Say prayers it goes as planned ... Momma HAS to get fixed right away! Otherwise we will have another batch of adorable to take care of!

Hope you have a wonderfully blessed weekend - HUG a furry friend!

What an adorable kitten! Yes baby kitties are a time suck! I would NEVER get any work done around your place, I would always be visiting Donkeys, chickens, kittens etc...