Animal Crackers - Cute poses are hard to get

Some days I go outside and there are animals with cute poses everywhere. Yesterday I went out and really had a hard time finding anyone to get cute snaps of, Macey ended up being nosey and wanted a photograph of her. 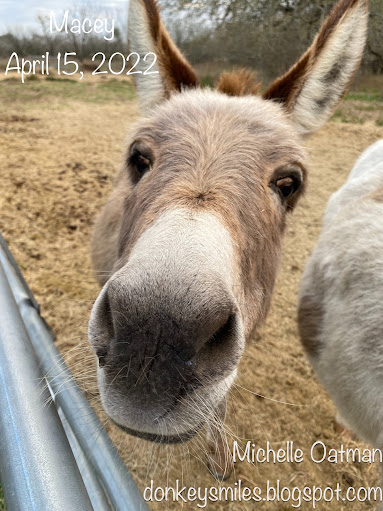 She is a beautiful old woman, and then I had my first cute photo. Then I decided to head over to the goat pen on the way Sergio backed up to the fence ... this is his way of telling me he "needs" to have his rear end scratched. 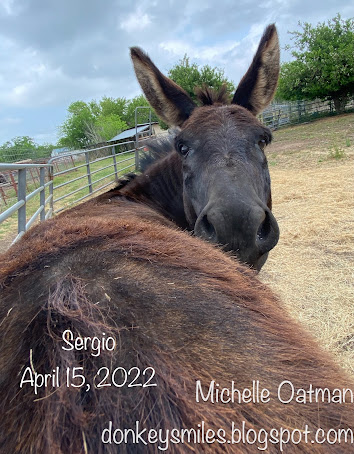 Now he was calm and stayed still as long as I kept scratching. I stopped for 1/2 a second to try and snap a photo and I got this look from him. "Really... don't stop!" LOL I kept on for a little while then tried to explain I needed to move on and find more photographs. He wasn't happy... he trotted along the fence with me and snorted as I moved on. Not happy I had to leave. He is such a funny boy.
At the goat pen they were all being lazy and laying around. Sweet Pea caught my eye. She makes the funniest faces, just cracks me up. 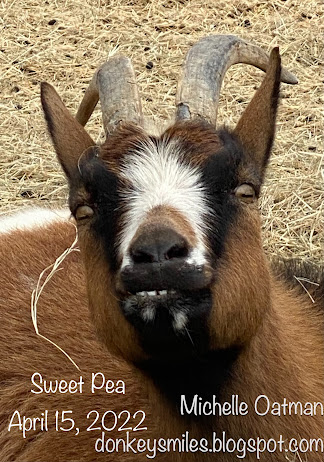 I really think she makes them on purpose sometimes. She had her neck stretched out, ears back and that silly grin with her teeth showing. So silly.

Crissy was finishing up some breakfast. I wish I could explain how much hay she had stuffed in her cheek. 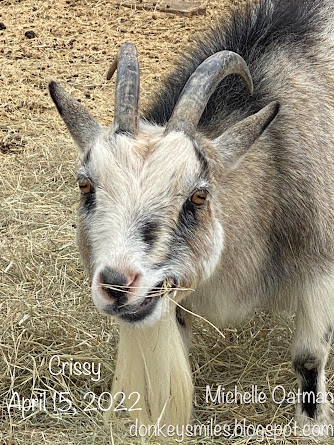 I stood there and talked to her as she just kept putting more and more hay in her mouth. She then laid down and chewed and chewed. I guess she was storing it up so she didn't have to stand and eat. Had something to "chew" on for a while.
Vera was standing at the fence staring off at I have no idea. I talked to her and nothing. Still have no clue what she was looking at. Maybe I would rather not know? Maybe she was just deep in serious thought? 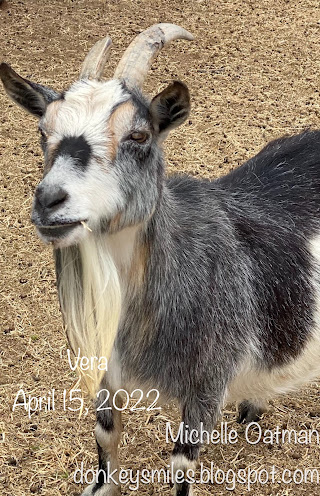 Do these goats have serious thoughts? I think I will go with something moving in the distance.
And then I wanted to show first week photos of Hubby's garden. Now it is a much smaller garden this year, time and weather has just kept things smaller for him. More manageable this year in containers in the backyard. 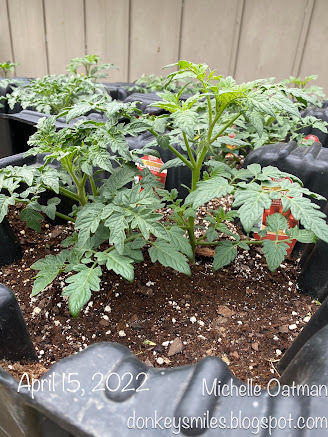 The tomatoes are already growing and have blooms starting! I can't wait to have fresh farm grown tomatoes! We (love how I say "we) We also have Yellow Squash, Zucchinis and potatoes planted! I'll show progress now and then.. love fresh garden veggies.
A rare rare sighting here - This was such a shocker to find later in the afternoon - Daddy Cat, he rarely is this still and in the open for a photograph, but he getting a little tamer. 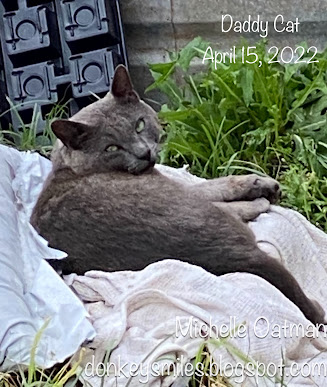 I found him lounging on a pile of soil from the garden. That look is please don't come any closer and make me run off cuz this is very comfortable. I zoomed snapped and walked away. After all he did look very comfortable.

Hope you have your Saturday Animal Crackers smile  - we love you visiting each week.

Yesterday slipped away before I came to visit! Busy morning, now company is gone, and I have time. It is always fun to stop and see all the fur babies. Hope your Ester Day is calm and blessed.