Animal Crackers - How did he do that?

Last week I casually mention to Hubby that I have been trying for weeks to get a good photograph of our little chickens Itsy and Bitsy for the blog. Every time I go out they run towards the fence panels and push up against me, sweet for sure but not great for photographs! So he starts sending me photographs.. like lots of different photos of the two little girls! Now they do run towards him too... but somehow he snuck out and got some great shots! This one was my favorite! A bit jealous of his skilz! 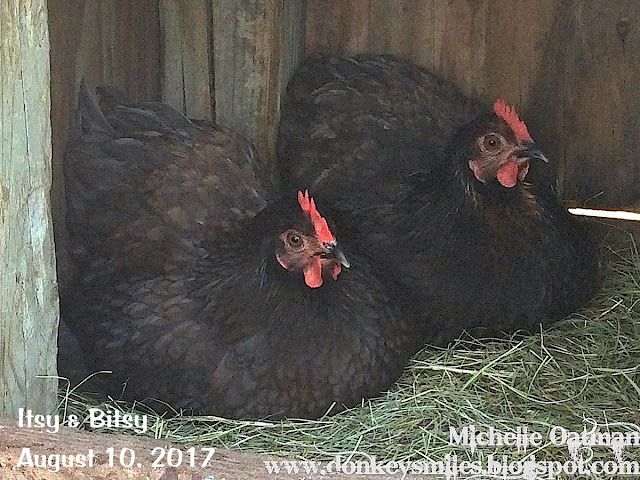 Oh my they are so cute! These two are the home hatched and raised chicks and they are like Hubby's special kids. He is so attached, and it is really cute the way they run up and jump on him and eat out of his hands.

Now my baby boy Autie. I know I show him chillin' most of the time. But this one was so funny. You see he had a bath last night, so he is all clean and fluffy... and after going out yesterday morning he ran in and legs went straight out, he hit the cool floor and he sighed... My boy... 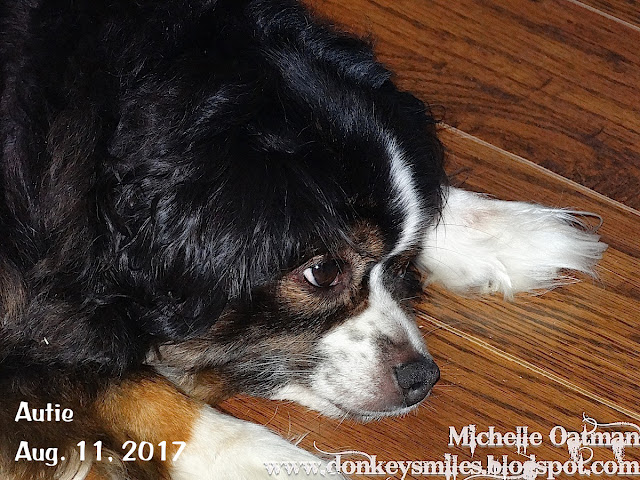 I went out earlier yesterday about lunch time to take photographs and it was already getting steamy hot and almost everyone was hiding! I was so upset I just couldn't get out in the morning yesterday... next week I am going to have to get up and go out before I get working while it isn't as hot. Or with Hubby's luck with photos maybe just let him shoot next week! LOL

Heard a little high pitch sound from Peso while walking by. This guy is just too funny. Big tough guy... and he has the highest pitch voice that sounds like a little girl. LOL He was hiding under his deck of his hut. 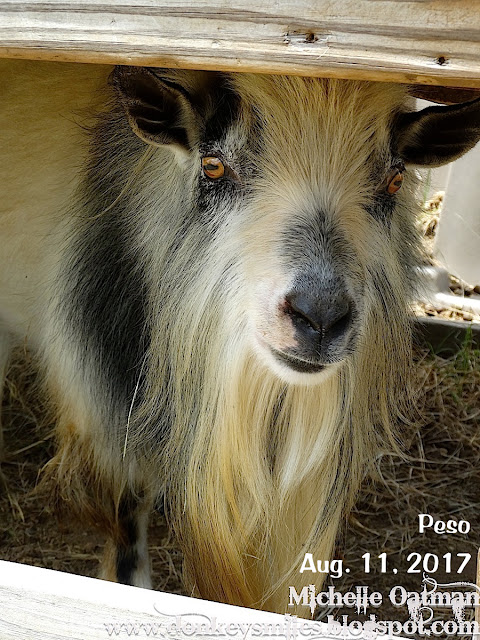 I am sure it is cooler, but I think we are going to have to talk to Dad to make his next deck just a few inches taller... then he could stand up under it.! LOL He loves his deck most all year and jumps up on it and over sees all the ladies in their pen, but in August... too hot up there! Oh.. maybe Dad should build him a patio cover for his bachelor pad! Yea... I will put that on the to do list! He will love that!

Hank was down in his pen chillin' in his hut. Was quite a way from me, and he really wanted to come to me for a little attention. But that would mean walking across his entire pen in the sun... 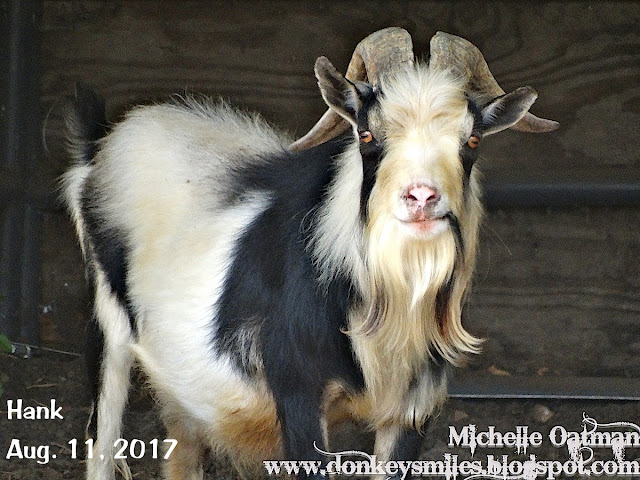 He just said a few things to me from a distance and stayed right where he was... Don't blame you Hank I am heading in pretty quick myself!

One photo of a donkey this week, The men were the only ones out this week. Jorge came for some head scratches... Sergio for his kiss on the end of his nose. And then I even got a rare head scratch for Pavo!! 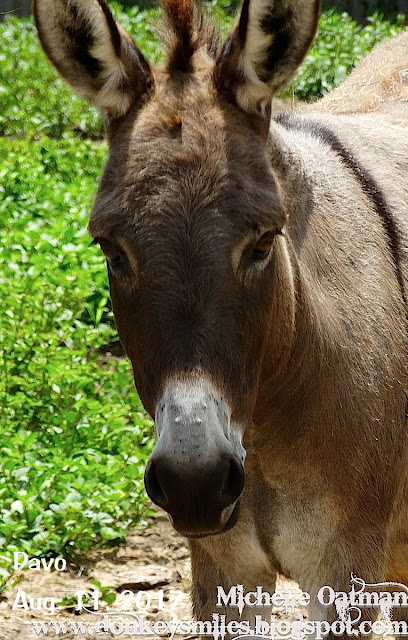 He is such a calm sweet donkey. Just like his Mom Darlene and his older brother Diego. But he is even more cautious. Likes attention, but only when no one else is hogging up the fences. But I got a rare few minutes with him just the two of us and some sweet loving.

I have to brag on loyalty... Miss Moxie I so adore this girl. Even with the heat she stayed right with me in my rounds to all the pens and taking photos. We got in a nice walk, some chit chatting, and of course lots of head and belly rubbing. To her not me..... LOL  Love her so much!

Hope you have a wonderful weekend planned. I don't know of anything major for us this weekend. Things around here I am sure, but just quite weekend. Like that plan myself!

Hugs and hug someone furry or feathered!


We have been so cool it is sometimes chilly! Weird for Iowa in August. I am sure as soon as school resumes it will get humid and HOT. :(
so nice you got to love on Pavo. And Moxie really is darling, such a love.

It has been a weird year weather wise here in OK. Here it is 3:15 in the afternoon and it is only 70° and forecast says 80s for the whole of next week. We have also been getting rain...not dribbles and drops but like yesterday almost 1 1/2" in a short period of time. Tulsa got hit with a tornado...whats up folks it is August. Love Pavo! He was such a cute baby. Your hubby did a good job with the picture of the girls and Moxie and Audie are such sweeties. Have a great week Michelle! Stay cool! Vickie