Animal Crackers - A little Moving Around

Old age really is not fun. Now you see this week I had a birthday.. the big 5-0. Not that number really bothers me.. that much... LOL Well my furry babies have the same issues with age... just wish with me it was getting skinny like them. That I could use a bit of! But for them it isn't healthy at all. We worry about our older kids as they age.

A few months back Black Jack was needing a bit of help with some added nutrients and well.. fattening up. So Black Jack was put on some really yummy, at least he likes it, special feed for aging equine. It has done wonders for him. He looks amazing, coat is shiny and he is more active and not to hurt his feelings but he is much fatter and healthy. 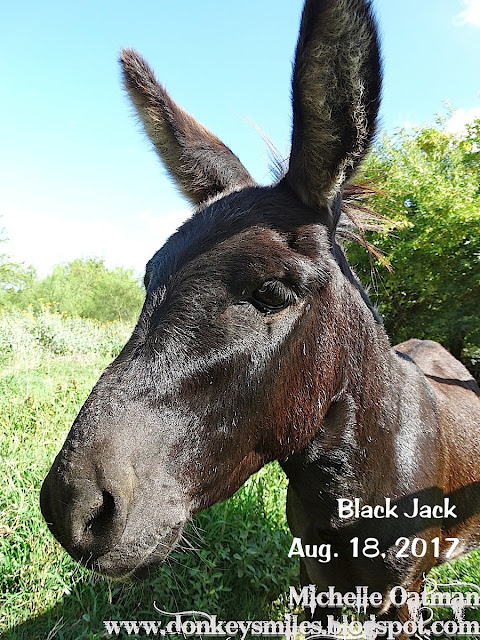 What a stud! We are both counting down the days until it cools off and fall is officially here so we can move in some pen-mates for breeding. I pray that we can get more solid black babies from Black Jack before he is retired. Such a sweet good-looking guy!

Now already retired is Paintbrush, our oldest goat. She is in need of a bit "more" and in with all the girls she just isn't getting in there and getting her share much less a bit more. And honestly Frankie our first and old buck is aging and getting a bit thin as well. So we decided that despite the fact that Annie and Frankie love being in the same pen and live happily together that maybe we should move Annie out, put Paintbrush in and then we can control and add some fat to out older generation. Annie tends to take more than her share so this gives the two that need the feed the chance to eat in peace. 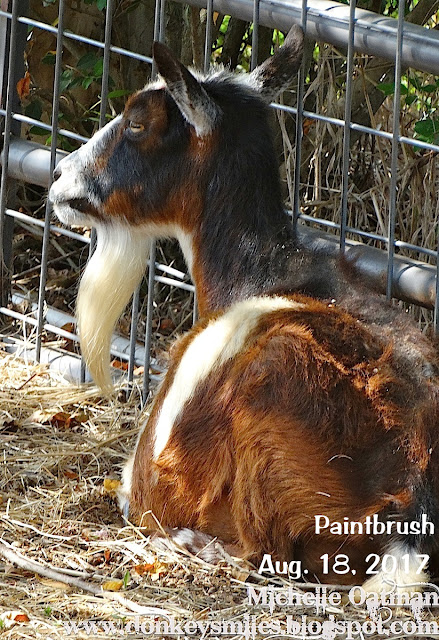 Paint or Annie were not super thrilled the first day. Oh Annie has some fun bossing around all the girls and being in the larger pen, but I think she was missing Frankie. Paintbrush was not happy about being apart from her baby Olive (I say baby loosely as she is long been an adult) But now I think things have calmed down and Paint is liking the "retirement" pen. It has more shade, and well... that extra and much yummier food... 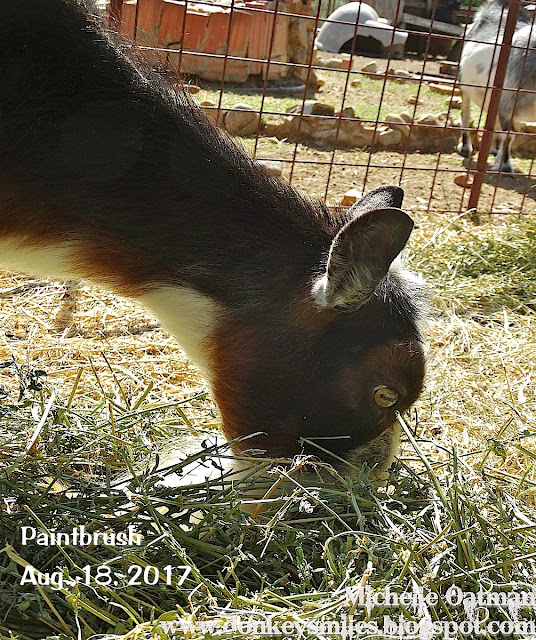 The goats get Alfalfa a couple times a week along with their daily Coastal Hay. But the retirement pen is getting it much more often and even some added grain for dinner a few nights a week. A plus for sure! Hopefully they will show the same improvements as Black Jack.

Here Annie has settled down, but I think that is a bit of the jealous eye she is sending over to Paintbrush. 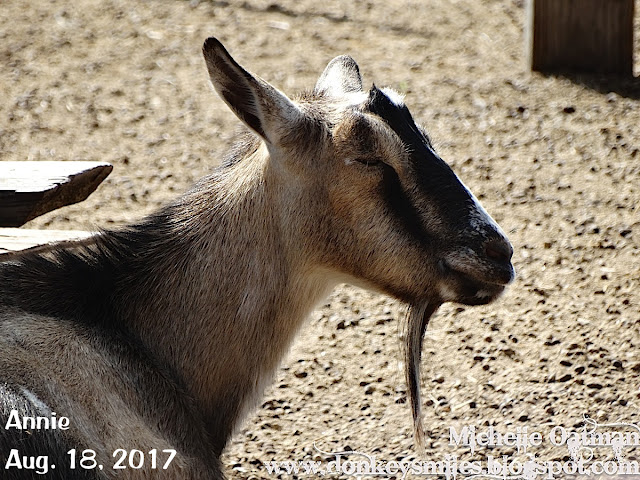 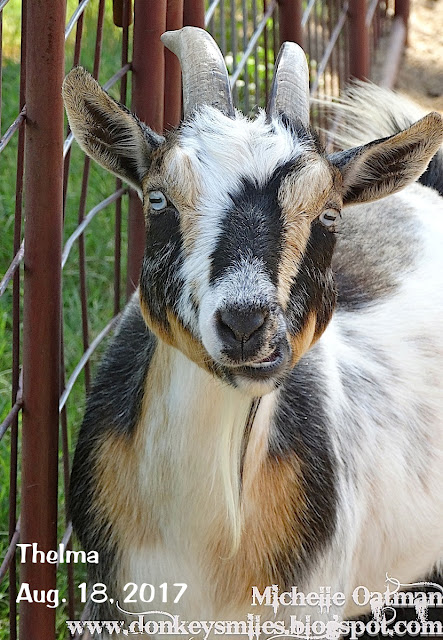 Wish you could hear her.. really she was chatting up a storm. LOL

Now here is one that has the best of both world. 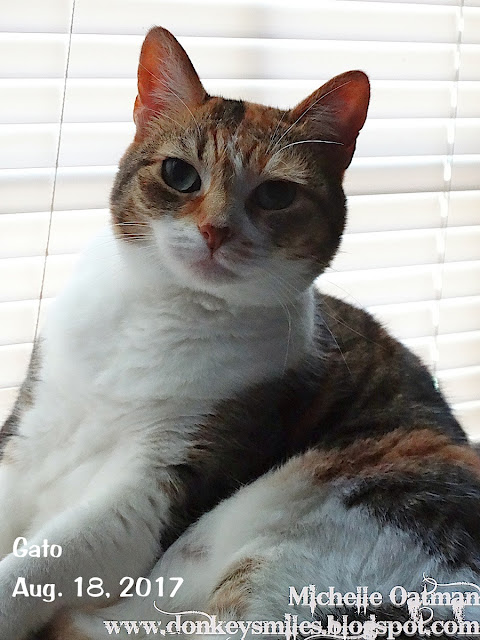 We all know Kitties love laying in warm windows... Gato loves laying in which ever window has the morning sun coming in. But she has found a spot that has the warmth, while under the fan and air conditioning. Now this is the spot people! Smart Kittie... LOL And might I say pretty kittie too!

Hope you all have a wonderfully blessed weekend, and that we gave you a little smile to start off the weekend -

Happy belated Birthday Michelle! I had my 50th last year...phew! I still can not believe it, when I see the number...well, but this is life and we shoukd be happy for another healthy year.....like your sweet animals =)
have a lovely weekend!
Greetings from Austria,
Martina

I thought that 50 was horrible until I hit 65 this year...didn't have a problem with 60 at all. It definitely passes way to fast! What makes it more impressive is that I have had to fill out a questionnaire's and when it asks you your age i.e. 50-60 or 65 or over I almost freaked out...I am in the over group...One thing Michelle is as humans age we start losing weight and needing nutritional support but I read that doesn't start till the 70's...I'm safe! Loved all the pictures today. Blackjack is a beautiful babe!

Happy Belated Birthday Michelle. (I have 10years on you!) I sure would not mind getting thinner with age too! But it seems to be the opposite. :( Gato is a BEAUTIFUL cat. Smart too. ;)

Happy Birthday Michelle! I'm right behind you... and not looking forward to it, but it beats the alternative! LOL That Blackjack is a handsome devil for sure! Hope you get your wish for some more donkey babies :-)

Happy Belated Birthday, Michelle. I hope you had a lovely day. I'm that as you get older, time flies by faster :-) I feel like I only turned 50 yesterday and now getting closer to the 60 mark. Mind is still in the 30's but body is already in the 60's so it's a constant fight :-)
Your animals keep you young, so enjoy those beauties.
Have a wonderful weekend and thank you for the photos.
Hugs,
Lena