Well it has been a very interesting week here in Central Texas! I know those of you that live in cold climates chuckle at my complaining about the "cold".. but the issue is here is Texas we are just not prepared or built to have such cold temperatures, especially for days on end. We were trying to prepare the animals - with food and water for a day of frozen temps... then one day turned into days and days! Water went out... we started collecting any water we could get in buckets and totes for the animals. No water would be critical for them. Then the power went out. Then on for a little while... then off for a long while... felt like forever. It never gets down for long periods in the teens here... much less the single digits were were seeing! Poor Hubby was collecting any trickle of water he could, and working out melting snow to get out to the animals. Hauling 50-60 gallons of water to them was rough work each day, but he did it. Whatever it takes for his animals.  It is amazing how many layers of clothing I could find to put on.. and how many quilts you can put over you before you can't breath anymore. Lol inside doggies were big time into cuddling and Gato seemed to think the only place she would get was literally around my neck under the blankets. Longest hours ever! But finally... power is back - heat is working and as of writing this we are getting water pressure at times! Still having issues with the water but it is coming!

All the animals made it through well and despite their confused looks of what the heck is going on they are good.

It really was beautiful...  Hubby did a great job snapping photos for me. I will be honest. I didn't go out in it much at all. Clutz here... snow ice and no heat to warm up uh nope will stay wrapped up inside. He was the super hero around here. 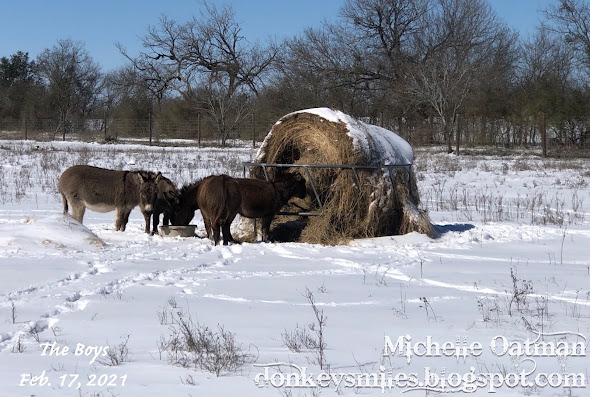 It snowed all night during the first round... woke up to 4 inches of powder snow. Thats when things went all insane and we lost power the first time and water was shut off.

Love the look of the trees... 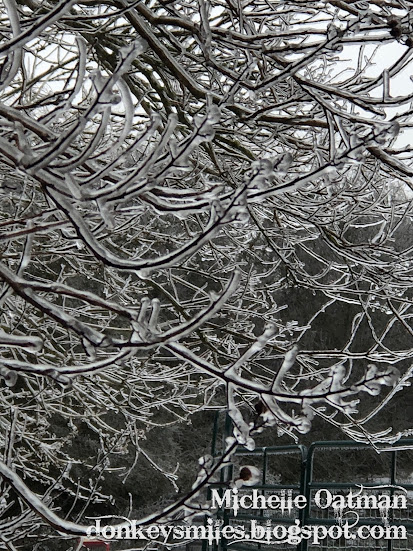 Then Hubby said "as long as they don't break off and tear down our power lines" Now our power outages were due to rolling blackouts - gone nuts if you ask me... they said 45 minutes on 15 off was the plan. Uh nope many people went days without power, luckily we were just a day an half of no power, then hours at a time off with an hour or two on. During that day and half Hubby decided to check things out and see what was going on... yep a huge property in front of us... one of those limbs of ice took out the power to our property and the handful of houses behind us. Finally someone came out and fixed it and our power was restored just before dark. Glad Hubby took things into his own hands checking things out!

I don't have the smartest of chickens... some of them just stayed out in the snow then carried little mounds on them for a while. 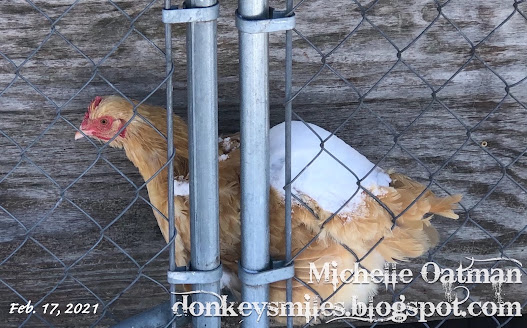 Autie loved the snow. Ran out no problem and checked out the entire yard of white stuff. Libbie.. she went out did her business and went straight back in, no big deal, no issues of anything going on. Chica.. well that was a different story. 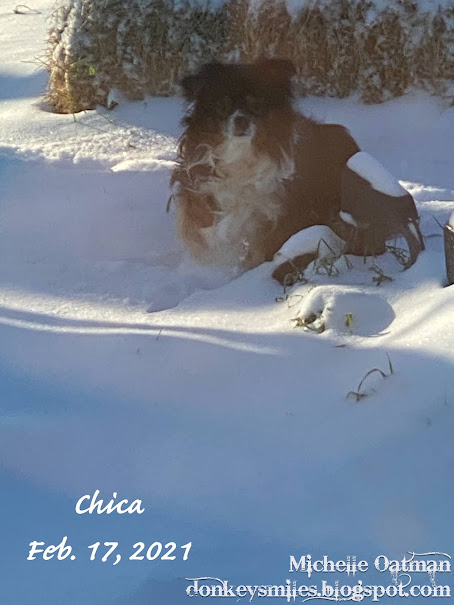 First few times she had to be carried out put in the yard and told over and over "Hurry up as soon as you go you can come back in" Nope she would just sit down and shiver and look at us like were torturing her and we were horrible parents. It was so sad. But after day three... she decided it wasn't too horrible and she was running out with Autie and barking at everything. Silly dog.
The second round of snow came during one morning... forecast said it would all be over around noon. At 4:30 it was still coming down... insane! I can count on one hand the snow I've seen here in my entire life and now 2021 we have had it 3 times! Once in January and then twice this past week! 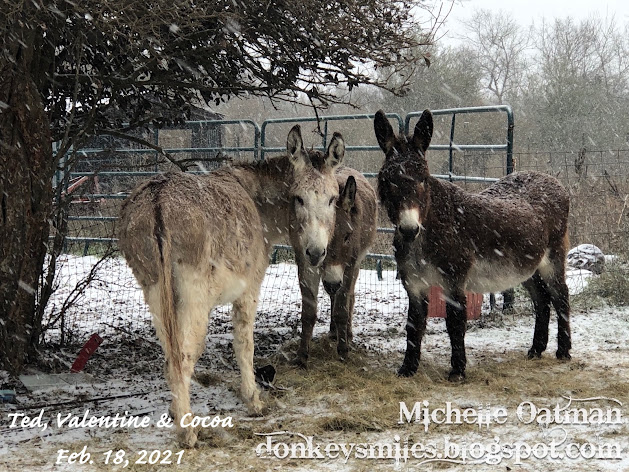 Once we had power again Gato decided that as long as she was on my lap that was good. But she wouldn't get very far off of me just in case the temperatures dropped again she wanted to be ready to get under covers! 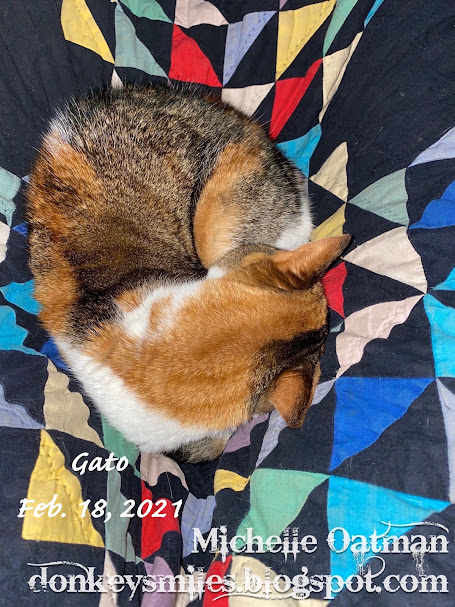 Now life will get back to some sort of normal hopefully. I hope this isn't some sort of new climate going on! That would be really scary! Probably going to take a few days to make sure there isn't any damage to pipes, trees and structures. But we are really done with Winter here... Common Spring! LOL
Hope you are all safe and warm where you are - We are blessed to all be healthy and WARM here!
HUGS and

Hello Michelle,
it was me last time who was telling about much colder temperatures here in Austria, but hey...you are right..it is different what you are used too! And I jus herad in our news about Texas and the problems with power! This is NOT fun, especially as you need it for the heating (by the way...do you have heatings at all?) and water. It is ot funny to have no power and especially not, if it is freezy outside!

My cats acts similar each winter when the first snow falls. They do not remember last year when they went out =) One of my cats is out of the house most of summer, but whne it gets colder he is in the house...day and night.
I just love winter with snow, but we are used to it and we have it cozy inside.

Hope you will get better weather soon!
Martina

I was worried about everyone’s outside animals, so many days and nights of a hard freeze - then no water! It’s been rough - I’ve been without power for a week from hurricanes before but that’s a whole different matter then when you have no heat. We were out for three days and then boil water notice. I am so glad your hubby was able to find water and he works so hard to care for them! Very happy to hear they are all unscathed and you too! Praying this is a once in a lifetime event for TX.
Hugs, Lori

It has definitely been a different kind of week here in central Oklahoma too! One of the record setting types. We made it down to -12 on night then didn't get much above 0 for a couple days! Snow well snow fell for days it seemed we got a total of 9.75 inches here at our house here in Norman...about 1.25" water equivalent. It is slowly melting off...Today it seems like a veritable heatwave at 39 degrees. We haven't been without electricity but for a few minutes and that was at night and everyone was in bed except me...I soon went to bed hoping it would be on in the morning and it was. My brother and his family live in TX from Grahmn to San Antonio. Various issues with electric and water...I feel for you guys and hope they get this power grid business straightened out sooner then later. Stay warm...keep the critters warm. You do have a great hubby...you chose well. Vickie

Sorry for All of TX And the deep south that are not equipped to deal with the snow and freezing temps. Thank Goodness it is warming up again. We had over 2 weeks of below ZERO nights and days in the single digits. Hurray, it is to be melting temps this week. After another round of heavy wet snow. Glad you are all o.k. Sending warm thoughts and warm hugs.