Animal Crackers - Caught in the Act

Oh my these three think they are very sneaky! "Dad" had just come home from the feed store... in the back of the truck were a few chicken feed bags. Uh CHICKEN Feed. 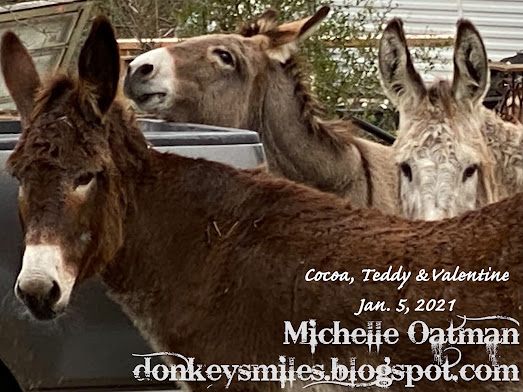 But all they know is that those bags came from the feed store there is a chance that just maybe they could reach in there, bite and rip a hole in a bag and chow down on as much as they could before caught in the act!  I snapped this photo through the dining room window before heading out and doing the No No No to them. As you can see Valentine was still slowing putting his head over the tailgate just in case I didn't actually go out... Sigh kids!

Poor Spartacus... I think I mentioned that he and Domino were rough housing too much and he hurt his leg. We think that is what happened anyway. They get along great. Just like most young men they play a bit too hard with each other. 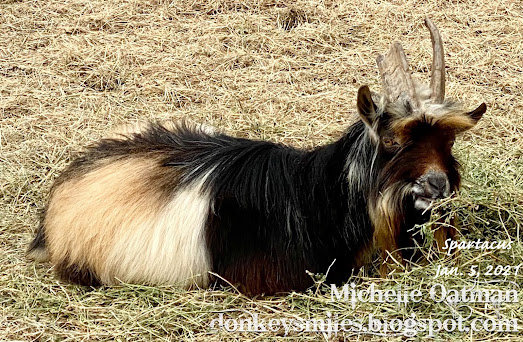 Well Spartacus is still not putting much weight on that leg... so the best way to rest his leg and still enjoy breakfast is use his hay for a bed while munching down.

Domino says it wasn't his fault... 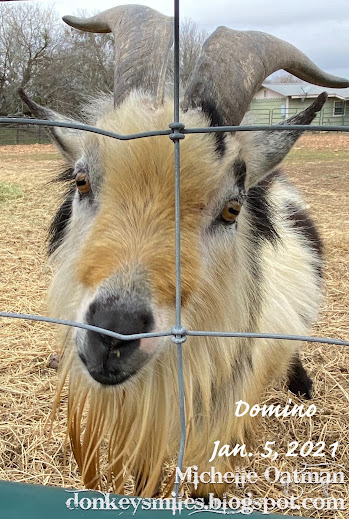 He is finally getting use to his new pen, all thought he does still try and use those big brown eyes to convince us that he should be back closer to the ladies. Uh sorry Dom...

Went by the chicken coop... this little ladies was really stretching out to see what the movement in the goat pen was. 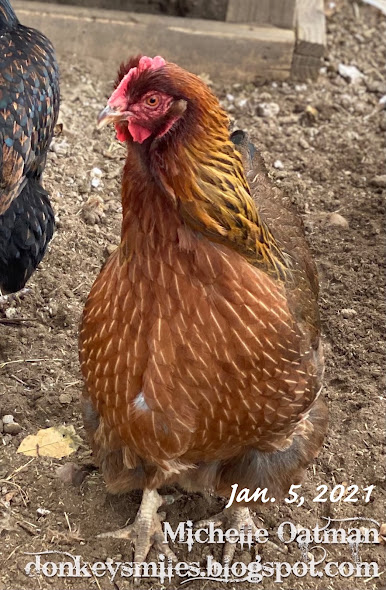 Ok.. all is safe it is just "Dad" feeding and all the girls running. Whew... the sky isn't falling! LOL

I snapped this one early in the morning before heading out. Just is too cute.  This is Autie watching Dad get his breakfast ready 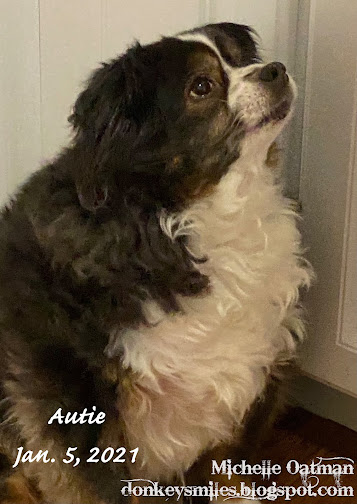 You see first thing every morning the three dogs get is their breakfast. Dad gives each of them two spoons of canned dog food. They think it is because they are very special and we totally spoil them. Which they are very special, and we do spoil them. But the real reason is that their herbal meds for each of their issues is mixed into the food. Shhh... don't tell them. They wouldn't touch it if they knew. But since they don't they gobble up their breakfast each morning with no issues of having to give them their medicine. Simple and they love it.

Thought I would show a antique collectible this week. I don't remember showing this before. Hope not. 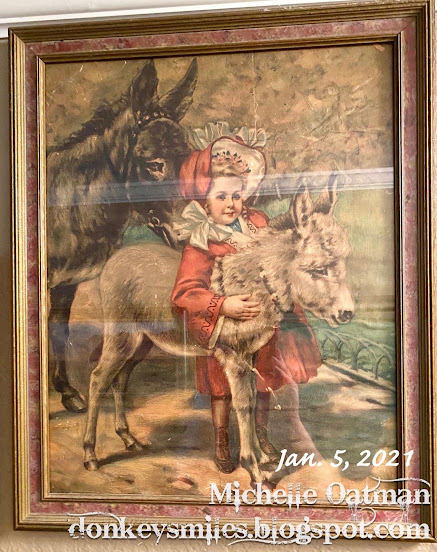 This is an early print that we found in an antique show years ago. I HAD to have it.  Sorry for the glare in the glass. Thank goodness for digital cameras cuz I took about 20 photos trying to snap a photo without the glare. I should have had Hubby come in and take it down but it hangs pretty high and he was busy so I am dealing with the glare. Anyway back to the print. It is a large print 16x24 in original frame. I adore that baby donkey with that little girl in her red bonnet and coat hugging him. And we all know Momma donkey is right there watching over her baby. Just adorable.

I hope you have a smile again this week. And hope that you have a blessed weekend hugging a furry friend!

Thanks for the photos of your beautiful babies.
Loved the photo of Autie.

Got busy this past weekend and only remembered I did not stop to visit you on Saturday. Glad to see all well. Have a sweet week.