Animal Crackers - Who's the Boss?

Being the only "boy" cat Mercedes or "Bubba" would like to think he is the one in control of the house. But we all know with all sisters that is not the case at all... This is a photo I snapped of the big guy one afternoon this week. We had brought in a great antique cabinet as we were trying to decide what to put on top of the cabinet Bubba decided he looked adorable up there and stayed there for hours. Ok he was adorable... and days later we have put nothing else on this cabinet as it has become a favorite napping spot. 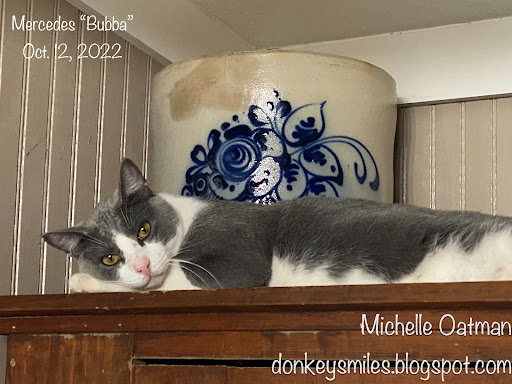 Now a few weeks ago a decision was made. Momma Cat was picked up from outside and brought in the house. Clearly I was not the boss in this decision, Hubby's big heart took over all control. I haven't mentioned it here, but Momma Cat's first baby Shadow has been missing for a while now. It has just killed both of us worrying about what happened to him, but we live in the country and there are dangers out there for small animals. Ever since then Hubby as been watching over Momma Cat like crazy. A few times in a row she didn't show up for her dinner. Or he found her too far off from the house. And one night after she was missing for an entire day... she showed up for breakfast and bamb! She was in the house.  He said he couldn't handle loosing her too.
You would think that it wouldn't be too big of deal... after all the inside cats are her babies. And yes I know we are totally insane nuts for having 5 now. I am accepting and moving on. He does take good care of them and cleans the boxes twice daily so I can't argue that point. Anyway Momma Cat was inside... and for a few days it was a little bit stressful. Her babies... they had no clue who she was and she wasn't thrilled with them either. They are a year old now. And I guess the family scent is all gone. Oh things have calmed down and most everyone is good with her now. She is so gentle and calm she honestly is a dream cat. 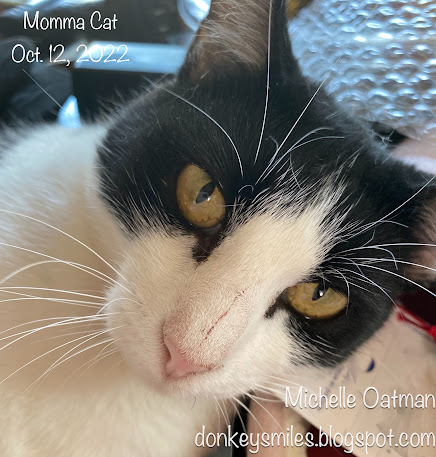 Only one of them still is trying to let her know "Who the Boss is" Porsche ... she is the leader and I guess Momma Cat tried to get to close to her this last week and well.... she got it on the nose. Poor thing. No worries she is all good and I think even Porsche is getting better, maybe Momma gave her some too? Not sure but things are all settling down now. And Hubby is sleeping all night again. Getting up in the middle of the night and checking on her was really taking a toll on him. He is such a big softy.

One evening this week, I spent some time up at the front pasture with the men. Hubby was in the pen checking on the cracks in the ground from the lack of rain. I worry someone will step into one and get hurt. Praying for the rain they have forecast for this week to actually come thru this time! And the gound will fill in to normal again. Anyway this gave me a chance to talk to the guys. The leader of this little gang is for sure Flavio. He is the big shot here! Handsome too... 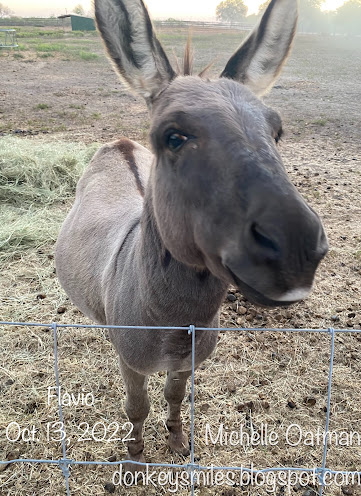 All though he will show off his silly side from time to time. 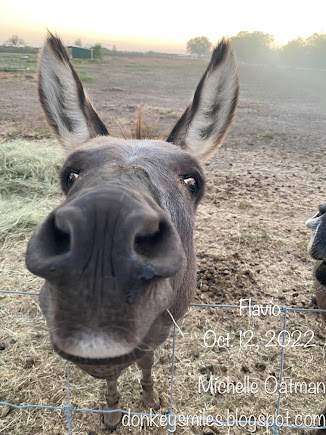 I worked really hard to try and get a good photo of Flavio's buddy Patricio. He was way to interested in keeping a close watch on "Dad" and making sure things were all safe. He is a very cautious boy. 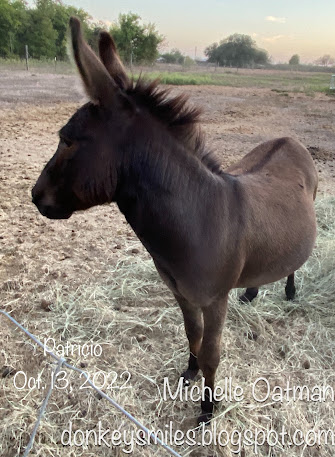 But at least with this one side view photo you can see just how stunning he is. Such a looker! Just like his Dad Black Jack.

And then the other two men in the front pasture - Diego and Miguel. Now Miguel was the boss for years! He may be little but he was seriously in control of everyone and everything! 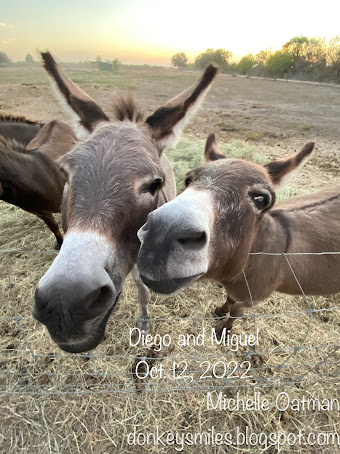 He has mellowed big time in his older more gentle gelding years. So laid back and always always always with his buddy Diego. My first baby donkey! Oh this boy was so so so spoiled as a baby! LOL . Love Love Love! And I love this photo of the two of them... shows off their personalities big time!

Well we did it again. We got up in the middle of the night and made the 2 1/2 hour drive to the coast for a few hours of fishing. Hubby said "Your not showing a photo of that again are you?" Well it is just too pretty to not share right? 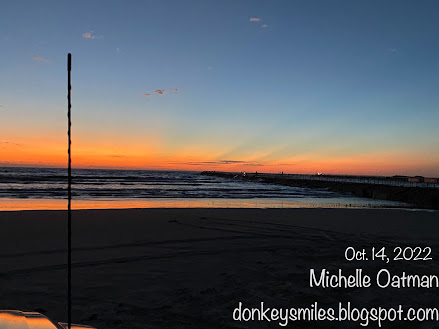 Soon the weather will be colder and Hubby has not had near enough time for things like this during this past summer he has been working so much. So another down time day was called for - and how gorgeous was this sunrise?
It was so fabulous to just sit in the peace of the waves and watch the sun come up. 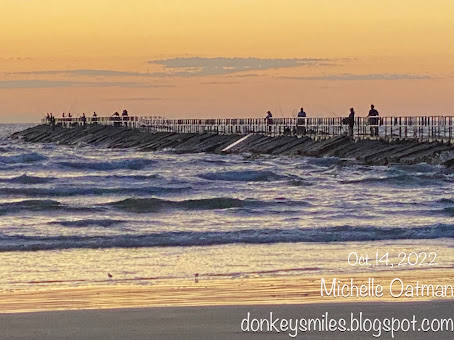 Hubby was one of those tiny dots on the far left at the end of the Jetties ... His peaceful place fishing, me I am more of the sit on the beach, in the breeze and watch the waves as my peaceful place. Then as it gets warmer and he is done with fishing a nice lunch on the Island before heading home!

Hope you have a Animal Cracker smile again this week... have a little peace planed for you weeekend.

Love the nose shot of Flavio LOL! That sunrise is gorgeous. Do you have to water your foundation? That is really dry! Praying for good rain for you - Lori K


So glad Momma cat is indoors too. My grandson's happy place is anywhere he can cast a line! So, he would understand your DH.
Have a wonderful week.

So glad you got Mamma cat indoors and Dad can now stop worrying.
All your beautiful donkeys look really well.
I too love the beach. Took Molly there for a walk last week. The ocean is so calming and peaceful.
Hope it rains for you soon.