Yesterday I went out a little later than normal to take photographs. So many of the fur children were already out in the pastures or snoozing in the shade. I went out to Raffie's pen to visit him. His pen is through the ladies pen, and well.. many times getting through the girls to scratch on Raffie is hard to maneuver. Well the Ladies had already made their way out into the back pasture so I could love on Raffie! 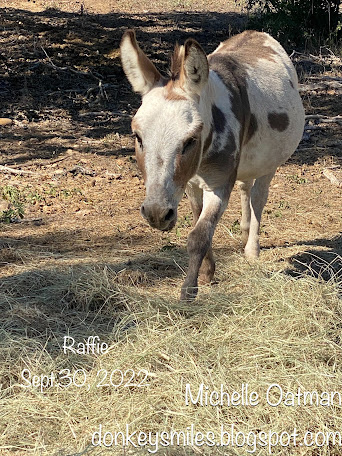 He is always such a happy sweet guy. My "Smiling Donkey". When he sees you at the fence he usually will stop what he is doing and come for some attention.

But just as he got to me and I was reaching towards him to scratch those beautiful long ears... he backed up and had this look to the side. 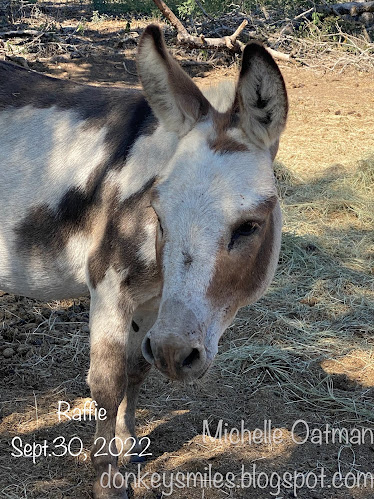 He is such a lover instead of a fighter... Pepita is still in with him, hoping she will get pregnant. But I am thinking we have a reason for no babies... Her name is Pepita. She is such a ....... well she is very mean to Raffie. And I think she has been running him off and since he isn't as aggressive as some jacks - he just gives up and walks away. Pepita is going to probably be moved back into the Ladies pen, give up on her at this time having babies and try next Spring with other ladies without Pepita and see if Raffie can do his job without our Queen B running things. 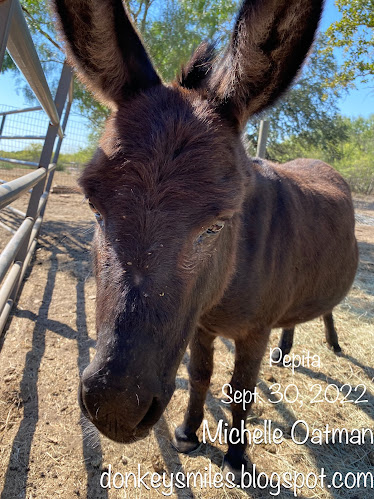 She is beautiful... And I so want babies from her... but sigh... well we will have to just do some new plans for next year.  Maybe her younger sister Josie won't be a meanie and since she is a carbon copy of her older sister?? Such lo
Oh and no worries... I moved down the fence and Raffie and I had some quality head scratches and nose kisses. Before Pepita ran him off.
At this point I looked towards the old barn. Years ago the miniatures had areas in the barn. We then built smaller little barns in each of their pens. So that old big barn is now the claim of the three standards. While looking that way I had to smile and thought maybe we should move that old sign on the door? 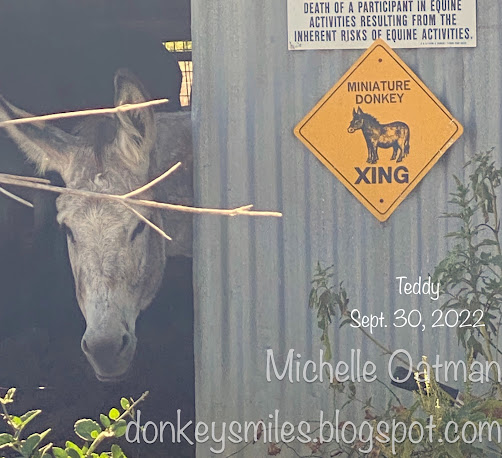 My attention then went towards the goats. The sounds coming from Alvin Jr was unbelievable! Such loud horrible noises from something so small and handsome?!! 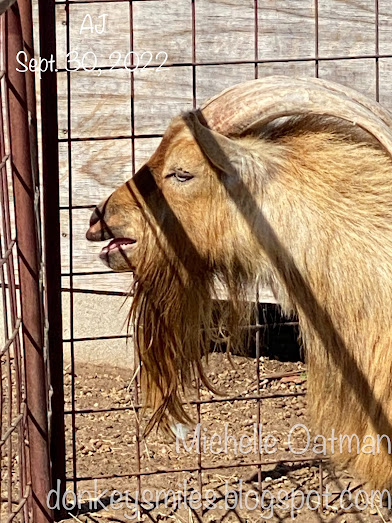 It seems that the girls were totally ignoring him and all his handsomeness! So he was calling out to get their attention, sounded more like he was dying, and the girls were not paying attention at all! LOL poor guy. Ha!
For example is Miss Vera. She was chillin' on the old rock steps, eyes closed chewing what was left of breakfast, enjoying the cooler morning weather. No attention at all to hunky man AJ - LOL 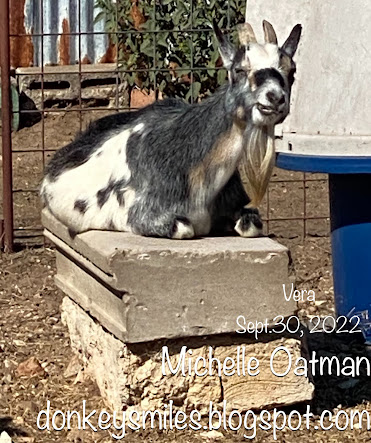 After going back in I found Porsche in her normal morning spot. 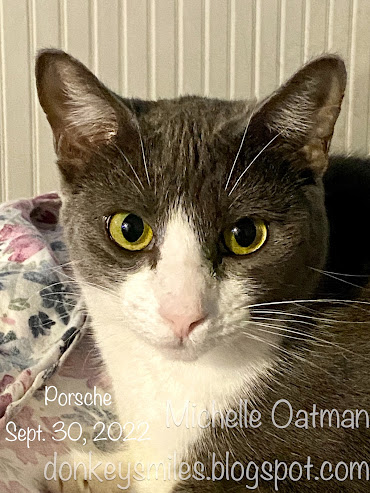 She doesn't sleep with us at night like her brother and sister. But as soon as that big bed is empty in the morning- It is all hers! You have to make the bed fast otherwise she digs deep into those sheets and creates a little cozy area to spent the morning. She still will claim the bed if it is made in time, but you know it isn't quite as nice with all the sheets and blankets made up nice. Such a sweet kitty!
Hope you have a smile on your face. I am now going to go out and check on AJ again as I can still hear him screaming! Maybe if he is thrown a piece of alfalfa he will give up on the girls and we can get some peace? Maybe? :0)
Have a blessed weekend -
HUGS and

Good morning. Welcoming October with a smile and cooler temps. Have a wonderful week. Pats and scratches sent to all the fur babies.