This week has just been a blur - I have not accepted that next week is Christmas, and then New Years is less than two weeks away. Seriously people time has been moving so fast I can't believe it!

I won't lie ... a lot of my time has been out with the baby goats. One of Daisy's kids was not doing well at all and I thought she wasn't going to make it. Other kids are all putting on weight and growing, but poor little Jackie just was going to blow away in the wind, so I jumped in and decided that I needed to supplement her eating habits. She still is out with Mom and her siblings but  3-5 times a day I give her a little extra. Sometimes just an ounce sometimes 3-4. Depends how much she is getting from Mom. Her Siblings are twice as big as she is and with there being only two places in line to eat - Jackie is getting shoved out of the way more than she should. A week ago poor thing was so skinny, now she is getting a little belly and is looking much healthier. Photo angle is a bit odd... sorry was holding her, the bottle and trying to take the picture! LOL

She is a cute little thing isn't she? 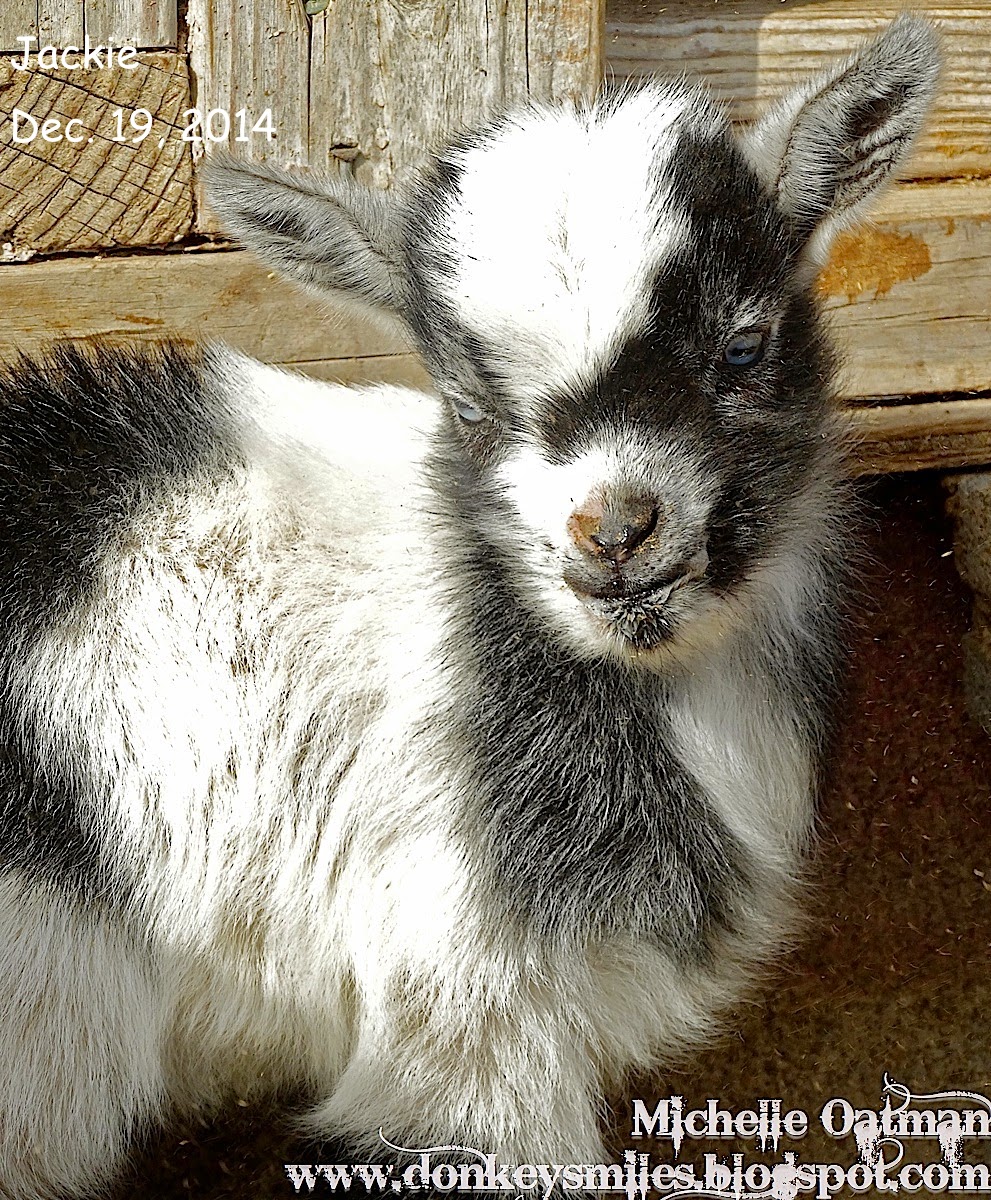 This entire group of kids is all stunning - but the girls have me just over the moon! 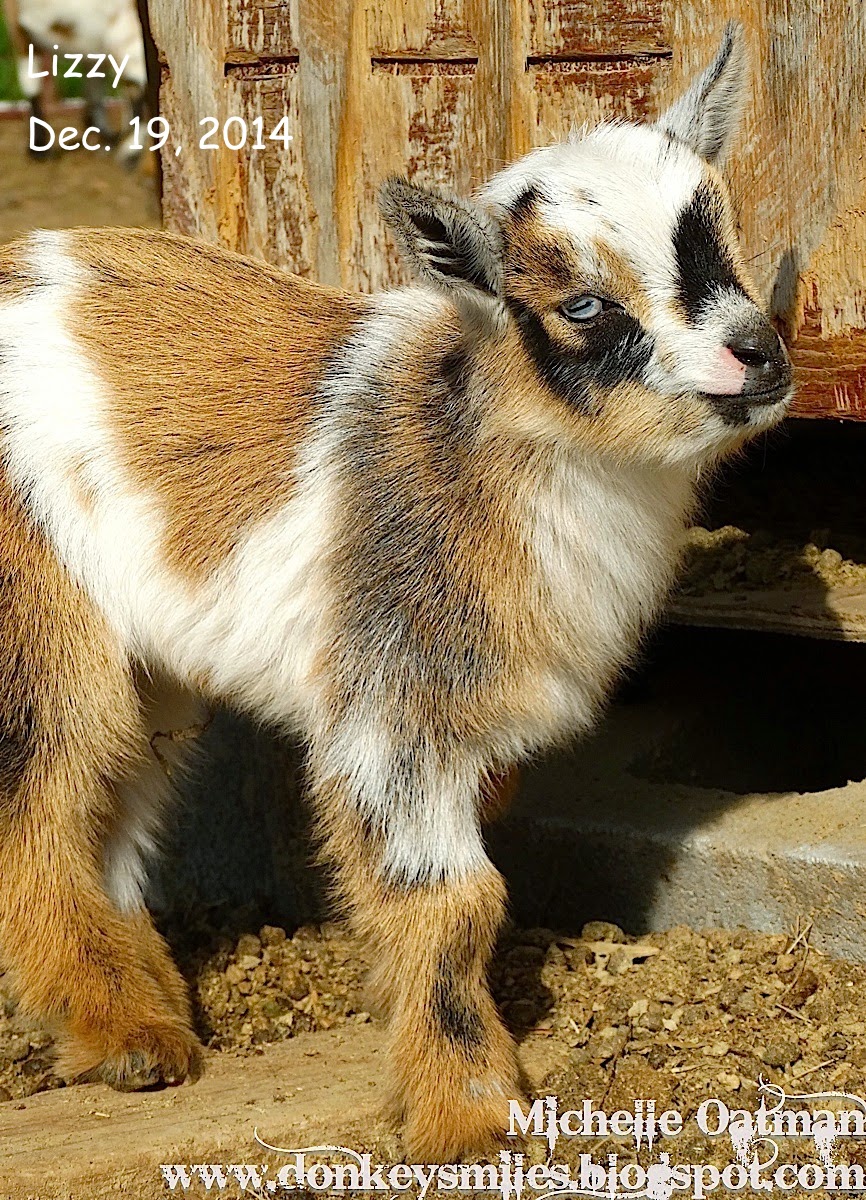 Beautiful - And a bold and beautiful as Lizzy's coloring is.. her 1/2 sister Josie is soft in her coloring.  Bred a red, black and white with blue eyes to white and grey with brown eyes... Gorgeous! 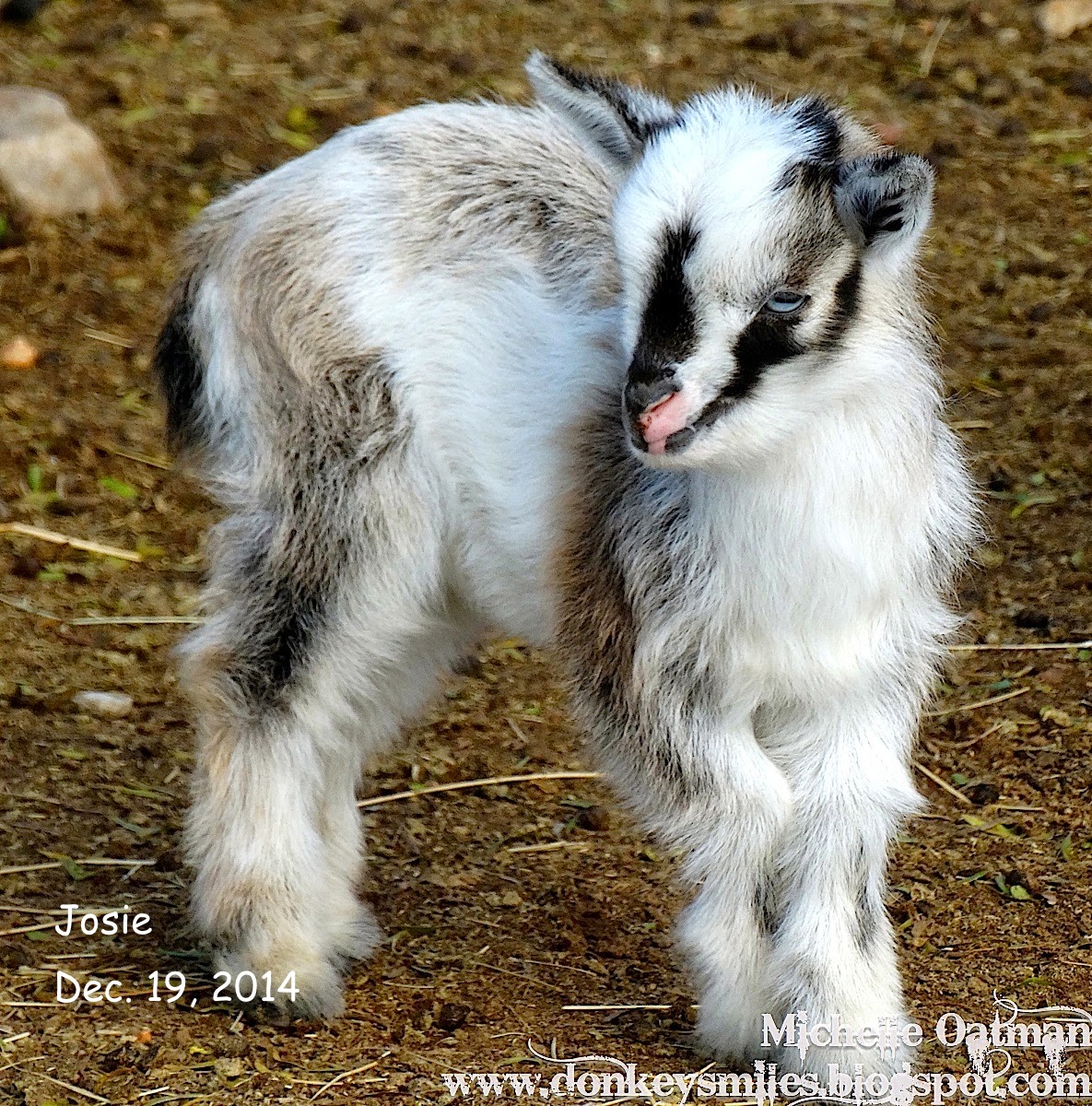 Snapped a great photo of Perrywinkle! Love this guy he just cracks me up he is so darn hysterical. I swear he knows it and like to make me laugh. 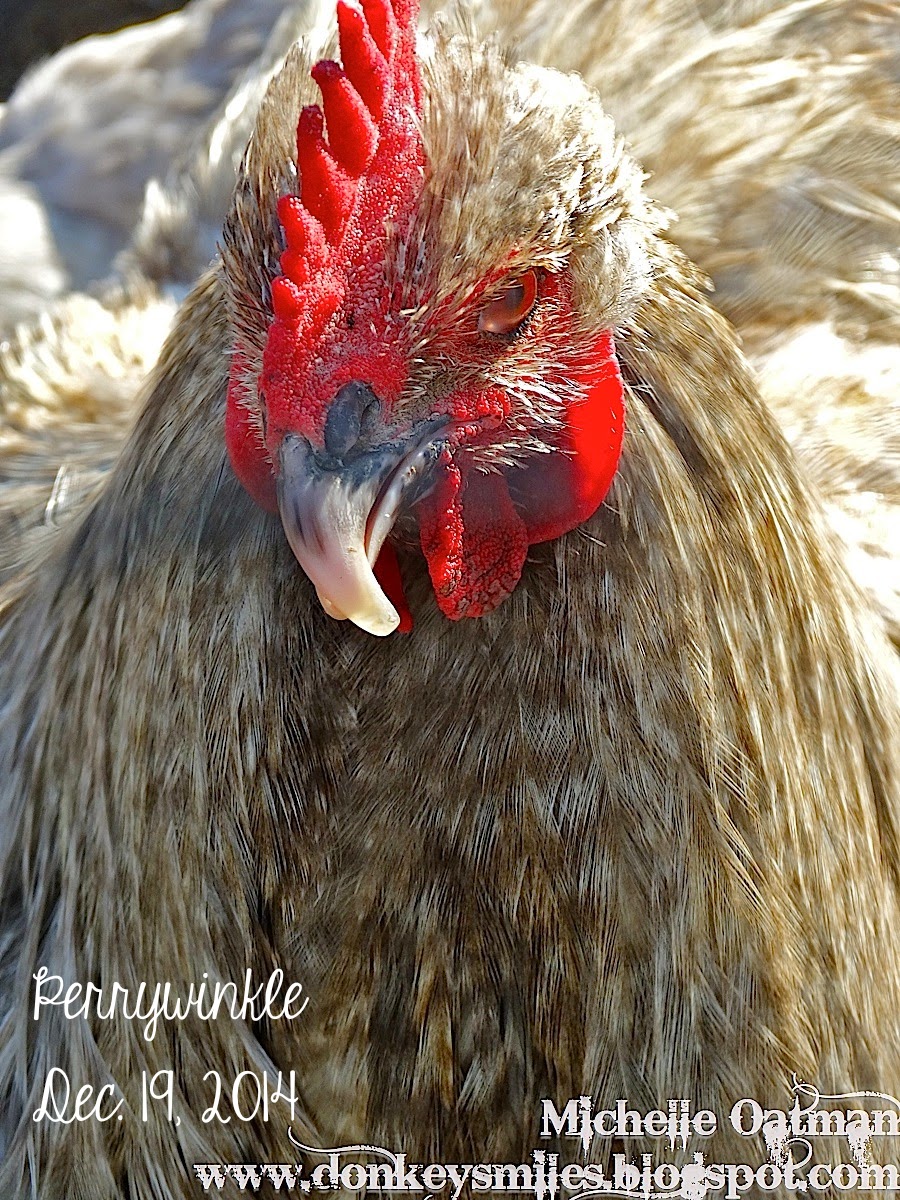 I have been trying to teach him to eat out of my hand when I feed lettuce. He really loves to get right to me and then checks all around me just in case... then grab at the lettuce as fast as he can. Great shot of just how crooked his beak is.. doesn't slow down the eating though!

Now I had planned some really great doggie shots as everyone had baths and had been brushed and was just so pretty.. or handsome in Autie's case. But you see it rained Thursday night after baths... so when "Dad" let them out first thing in the morning.... yeah.... they came back in a wet and nasty. Except Miss Libbie - she never gets messy. 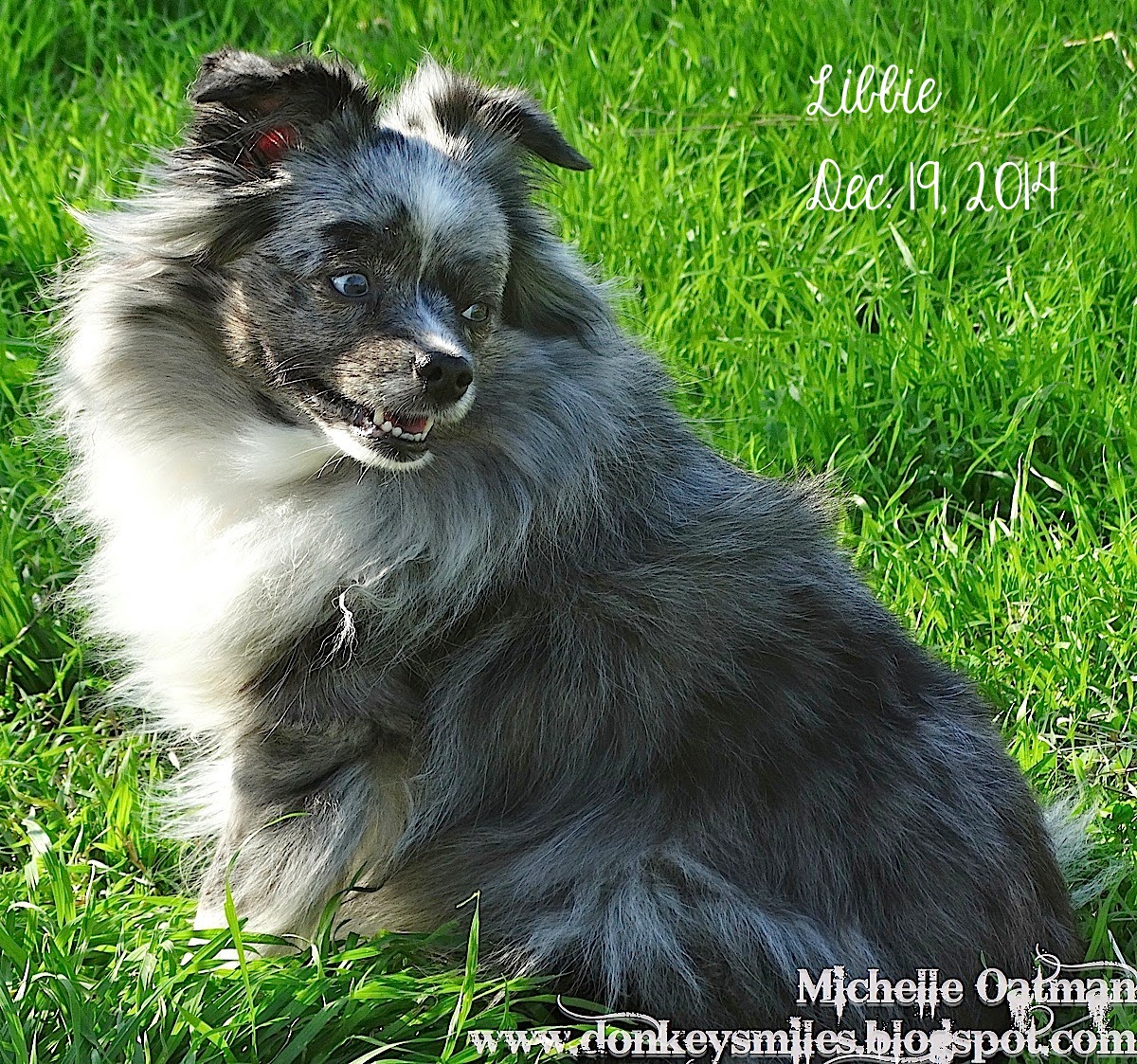 And yes... that is really green grass right now. We have had just enough rain for some thick winter grass to come in. Donkeys don't eat it... Not sure why, but they don't. Wish they did cuz it is really getting high in some areas. Can't believe Hubby is going to have to mow this coming week before Christmas.

Isn't my girl pretty? Even when she has her radar ears up!

Hope you have a wonderful weekend -
Hugs and

Posted by MichelleO at 4:30 AM

Great shot of Periwinkle and good to see that tiny Jackie is doing better. Hope things slow down
a little and you can relax and Really enjoy Christmas. Hope it is great.