A Big Thank You from my Nephew Tagen -

I wanted to take a chance to shout a huge Thank You from my Nephew Tagen!!

For those that don't know - my nephew had surgery a little over a month ago, and has been wearing full leg cast on both legs. As a 6 year old, this is a tough thing to deal with. But Tagen has been taking it all in stride. He does with everything, he is one great little trooper. This was to repair a few different things for him mainly the tendons in his legs and his arches in his feet. My sister could tell you all the medical talk, but for me that is all I can understand but I know it is much more detailed. Anyway he has been in full leg cast for over a month and just had them taken off and now has cast to his knees. He will wear those for 4-6 weeks, then braces, then they will evaluate from there.

I put out a request asking for cards from all over the world to give him something fun to look forward to, the plan is after the holidays to take them all in to school with a map and share them with all of the kids in his classes. It has been wonderful!! I have even had fun with it, as each day he received a card I would get a phone call from him with him telling me what the card looked like and where it was from. I got some pretty cute answers on a few. One he said it came all the way from across the big blue part of the map!! Wow! He is just too cute for words.

So from Tagen, my Sister and her husband, Tagen's Sisters who also have enjoyed helping find where the cards were from on the map. And especially from me - Thank you so much! The photo is an odd photo I know - this is one my sister sent me a couple of weeks after getting the cast. 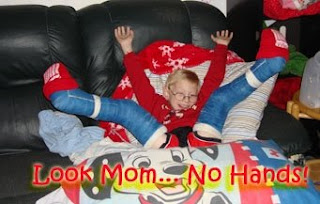 He was so proud he finally could lift the cast on his own and he yelled for her to come quick, she dropped everything and ran in a panic to find him on the sofa just like this screaming "Look Mom no Hands!" LOL He is a pretty funny kid. I love the socks on the tips of the cast, his toes kept getting cold....
The second photo is one we are very happy about as well. He takes horseback riding lessons as part of his therapy, it was thought he would have to give it up for a long time, and he loves it so much this was really sad. But no! He couldn't ride by himself, but he still got to ride! 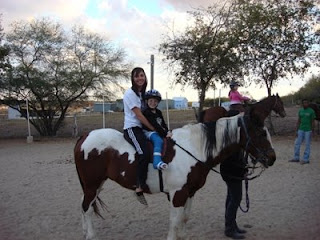 Posted by MichelleO at 7:56 AM

Email ThisBlogThis!Share to TwitterShare to FacebookShare to Pinterest
Labels: Friends and Family

Michelle,
Thank you so much for your beautiful card. I love all your donkeys. :)) Great idea..
I wish you a Merry Christmas and a Happy new Year... I hope all your dreams come true..
Hugs,
LIM

Love the photos! Thanks for sharing them, and I wish you and your family a Merry Christmas.

Wow! Great photos. Thanks for letting know how much fun everyone is having with the cards.

Thanks for the update Michelle. It is wonderful to see Tagen so happy and doing well. I am so glad that the cards helped. Merry Christmas to all your family...send a Canadain hug to Tagen and of course the donkeys.
Happy Holidays
Heather

thanks for the update and sharing your photos with us. Glad to hear he is doing better. Please continue to keep us updated.

Michelle, I would love to send a card or several, and ask my friend in England to do so also. I just need an address for your brave, and adorable, nephew. What a marvelous boy to handle this so well. Nancy

So wonderful to see your little nephew happy and smiling. Thanks for sharing your pics and of your donkeys too.Wish you all a happy christmas and a very bright 2009!

Thank you so much for the update. I was just wondering the other day if he had received my card and i'm glad to see that he has!!
I hope you and you entire family have a wonderful holiday season!!

Michelle Thanks for the update of sweet Tagen. He is so brave! I'm glad he enjoyed all his cards. How great he is able to manage all of what he has gone through with such a good attitude. God Bless Him!
I wish for all of yours a very blessed Christmas Day and a lovely visit. A Hug to Tagen. Thanks also to you for all you do to share your art and Donkeys and wonderful stories of all of them.
Merry Christmas!
Cynde

Aw Michelle, I posted mine ages ago, I think it might have got lost in the post, will need to get his address again to send another. Have a great Christmas, love and kisses to all the donkeys.x

Thanks for showing the photos Michelle. Good to see Tagen smiling.