Donkey/Libbie Day - And the race for Delivery.....

No baby yet... really didn't think there would be one just yet, but the race for who will deliver first is getting interesting!! As I said last week it is neck and neck between Cheyenne and Macey for who will have their baby first. Every few days Hubby and I change our bet on who we think will be first in the coming weeks. And then out of no where... is JAZZ! According to the calendar, I wasn't giving her a shot in the race for at least a month - but no, she has moved along and now has passed far by the other two Mom's to be! She could have her baby with in the next week!!

Very exciting and Surprising! Dad is having a talk with her here... :0) 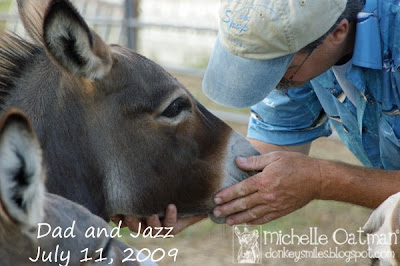 As for my two boys that we had gelded this week - Freddie and Pavo, they are doing well and as you can see by this photo Fred is ready to go back into the pen with all of the youth. I think we are going to give him a few more days in the "recovery" pen, for the girls safety not his... he still has girls on his mind!! 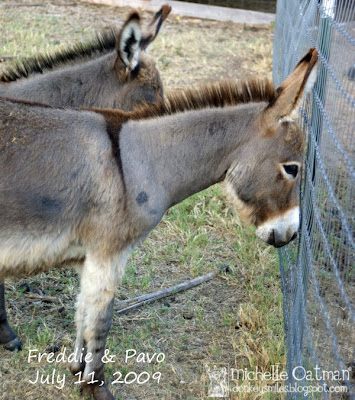 Pavo is really a stunning young man. I don't know if you remember he had a black face when he was born... has faded this last month. Shame.. but he is still a looker!! 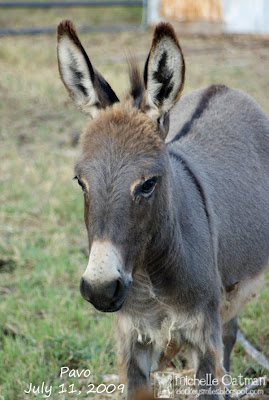 Jolene is really a pretty little dark faced donkey. Very small and very sweet. We are going to be weaning her baby Josie off her in the coming week. She is way past ready - I can't believe she is 7 months old. We just lost track of time with her, she is still really tiny.... you'll see how small when I get photos of her with the other youth. Sorry I didn't get a photo today of her... she was more interested in "Dad" on the other side of the pen. Hubby has a really big thing for her... they have a special relationship. 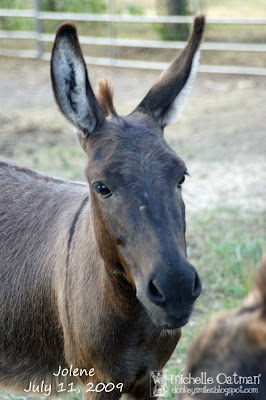 My boy Diego... my Eeyore - he really should have been named that. He has that slow life. Someone asked me about him last night... I said I really didn't think he would run fast if his tail was on fire... that is probably true. The only time I ever see him move fast is if he thinks one of the babies is in danger... he is such a good baby sitter. He was the first baby we ever had here, and the only one for almost 2 years! So he is a tad spoiled... I had him gelded right off so I knew I could keep him forever. My boy..... 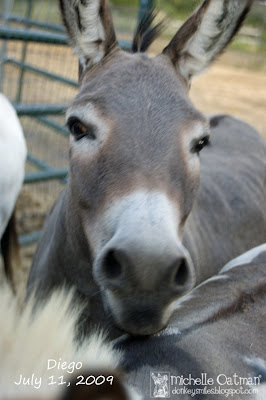 Isn't this a funny photo.... "Look Mom... Aunt Ellie Mae is teaching me to rub my own neck"... can't you hear Mirta telling Vicki that... And we thought that tent was just for shade for the donkeys!! 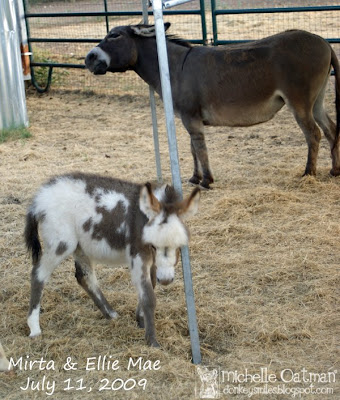 Libbie... OH Libbie - she has been much stress and frustration this week. And as soon as I get really upset and mad... she flips over on her back and blinks those ice blue eyes at me - she is so spoiled. Lets see to update the Libbie destroyed list. I got a brand new pair of flip flops... never wore them, Gato knocked them off the chair I put them on to keep Libbie from them. Two buttons off of one of Dad's shirts, she pulled that out of the hamper all on her own. And pulled up all three hallway runners and drug them down the hall and almost into the dining room. That must have been some real work as these are 4ft. runners and aren't light! LOL! Here she is actually happy playing with one of her own toys.. 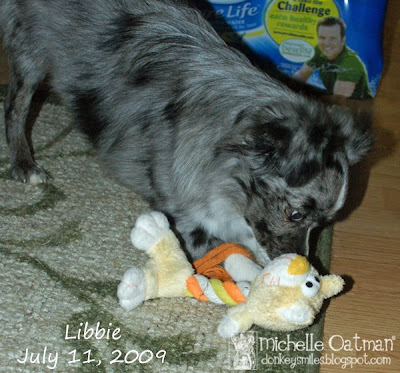 This one is funny... I gave her a cookie for sitting and staying. We are starting to "learn" commands. That is a chewing and a growl... Gato was walking a good 8 feet from her, not interested at all in her, but just in case Libbie told her not to get that small piece of cookie on the floor... 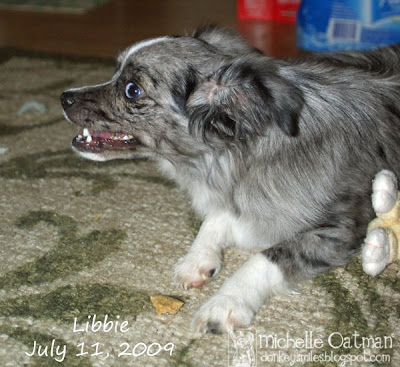 Well hope you enjoyed this weeks Donkey/Libbie photos... wouldn't it be awesome if next week I had new baby photos!!! Maybe........ :0)


Have a great Saturday!!

Posted by MichelleO at 7:48 AM

Love you donkey and Libbie update.

Great pics, they're all growing up quick. Have a super weekend.

oh my goodness, just too cute! what kinds of donkeys are they? growing up, the farm where i had my horse had a miniature sicilian donkey, and i've wanted one ever since! one day when my hubby's outta the Army and we get our dream farm, by God's grace, we'll have animals, including my lil donkies hehe :)

Hope you have some baby photos to show next week, I can hardly wait.

I love all animals but have a soft spot for dogs and donkeys.
Lokk forward to their progress.
Hilda

Michelle, I love your donkey updates!! So sweet. More babies-OMGoodness. I don't know how you do it all!!! Hugs, Cathy