Some fun with Mice!

Now I wish I could tell you it is just fun with the House Mouse I used on my card for today... but no... yesterday was an insane day with a tiny little mouse!!! A REAL LIVE ONE! Gato found it, yea! She did her "job" for the first time, but you see, she didn't want to kill it. She wanted to carry it around, play a little with it and generally just keep it. UH NO... that won't work. At some point she dropped it and Autie got a hold of it! Then it was a chase around my house the mouse, Autie and Gato. Totally stressful, and frustrating - finally I got Autie outside, with the mouse, and then said that word.. "Cookie?" He dropped the mouse outside, and looked up at me, giving the mouse just enough time to run off into the weeds.  Now it was live catch and release program and I would love to let you think how kind I am to all living creatures... but NO I wanted that little thing killed and no chance that it was coming back into my house!!! But I will settle and tell myself that it is outside, and gone....

I have a ton of House Mouse stamps, adore them. But honestly haven't inked them up in forever, they just sit on their shelves decorating my room. But I needed a fun "MAN" card, a friend that loves Coffee as much as Hubby does. And I have to tell you I really enjoyed inking this one up and coloring it. Need to challenge myself to use at least one old stamp a week to give some of the million stamps I have some love.

So here is my card - 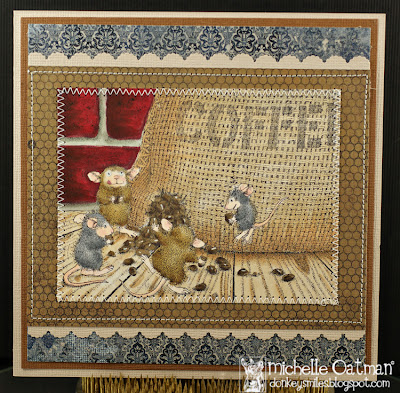 I wanted it to stay simple, and focus on the large image. That has always been the biggest struggle for me and some of these HM images, they are large.  My base is a cream colored card stock, layered with a darker chocolate or coffee colored brown. I then used scraps of Basic Grey papers - With the same color as the base, I punched two EK Success small scallop borders, and then sewed everything down. Simple - but for a man I think just enough. 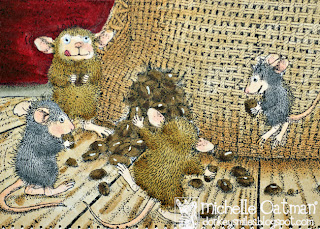 The image is colored with my Copics and high lighted with white gel pen. I just love the looks on their faces... LOVIN' their coffee beans! 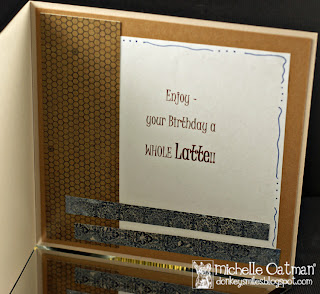 For the inside I used more scraps.. but they were getting really small... and a computer generated sentiment.


Taking this card to our Sunday Breakfast with the locals... hope he gets a kick out of it. It was a hoot to make this one!

Fantastic card , love the HM image - coloured beautifully. Have to say, I'm glad the little mouse escaped the clutches of Gato & Autie. :) Hope you're having a great weekend.

aroable Michelle, those beans look so real. Gorgeous card as usual sweetie.
Am so glad you got rid of your other little critter, phewwwwwwwww
Anne x

Michelle, I can not tell you often enough how I totally love your coloring! How do you this amazing HM image to color with Copics?? I am still such a lousy one when it comes to colorations with them....phew...what a gorgeous job you did! I love your card!!! Just amazing!
LOL...I know how you feel about the mouse...we had one inside last autumn and I did not feel well until it was catched! My cat alsoonly played with it and then it was not interesting anymore...
Martina

Oh lord. I had to have seriously been scared in past because I do a mouse "dance" based on sheer terror. I can go 50 feet with no recolection of ever moving! Guess the cold weather is upon us.....
GREAT card, love the coloring.

What a gorgeous card Michelle.

WOW, you colored that! I thought it was an image you cut from someplace and stitched onto your design. FANTASTIC. hugs...

Ohh Michelle its a great card. Hihi your not the only one with lot of stamps.

LOL at the mouse story, although I'm sure it wasn't at all funny at the time, been there...done that! Love HM and this card is a winner! If he doesn't like it feel free to send it to me!
R/

Yeah Gato! Maybe he and Autie scared the mouse so much, he'll go and tell his mouse friends "Stay away from that place, monsters live there!" It's that time of year when they want to come in from the cool nights.

Wonderful card, always a challenge for me to do a good "man" card.