Went out with Hubby to snap photographs the other morning. I told him... do not feed them until I get a few photos or I won't see a single face! These three are BFF's - usually always together. Bella her daughter Hannah and Juliet  -

They were trying so hard to hold it together and be patient - was really tough. But they were managing.. for the most part. I love how Juliet has no clue that she is so much larger than her miniature friends. She is very protective over Hannah... such a good girl. 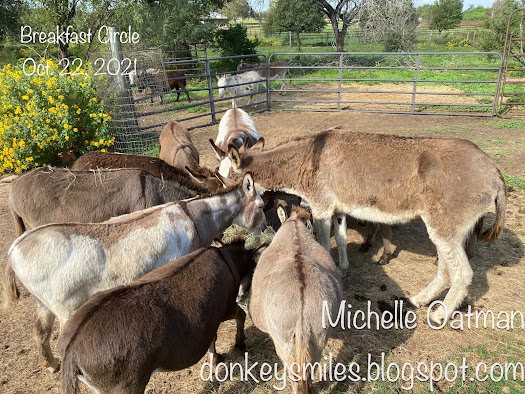 I call this the breakfast circle. And they are usually kind to each other, until someone moves too far over the pile of hay and tries to claim more than their share. Then a lot of shoving, pushing and snorting goes on, then it will settle back down again.
Now the goats were loosing it big time... Donkeys have been fed... US NOW!! 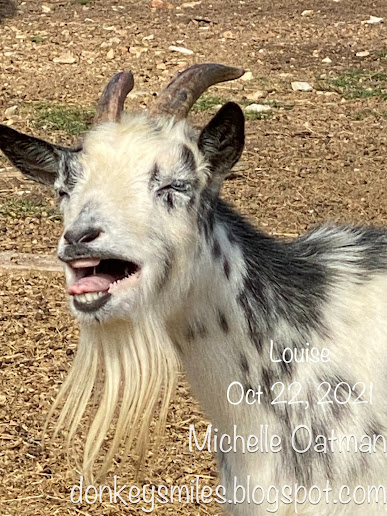 Louise is ALWAYS one of the very loudest. Man that girl can scream!! Small - but those lungs work well!
Went up to visit Domino and Spartacus's in the Men's Pen. For 1/2 a second you could have mistaken Domino for Alvin or Alvin Jr.!! Domino is a WHITE and Black Goat! EWE!!! He was nasty! 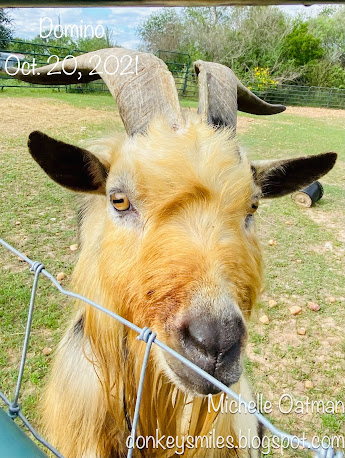 Between his Manly Goat Stink and I suppose the humidity and mud from the last rain - He was just ... WELL NASTY! LOL I told him normally I would have at least giving him some head scratches on his forehead as it normally is a semi clean spot. But honestly NO WHERE was even remotely clean! Silly boy goat! Or should I say STINKY Boy goat!

Then Spartacus was heading over for some attention. 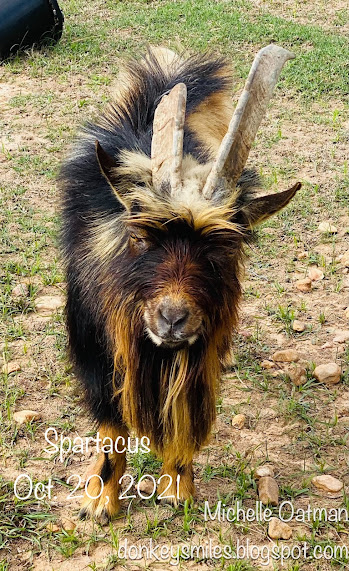 Now normally I would have given a little attention there as well - but I looked and smelled closely but due to that handsome dark fur I couldn't tell if there was a clean spot or not, and honestly after seeing his pen mate - I was leaning towards nope... not scratching his head either! 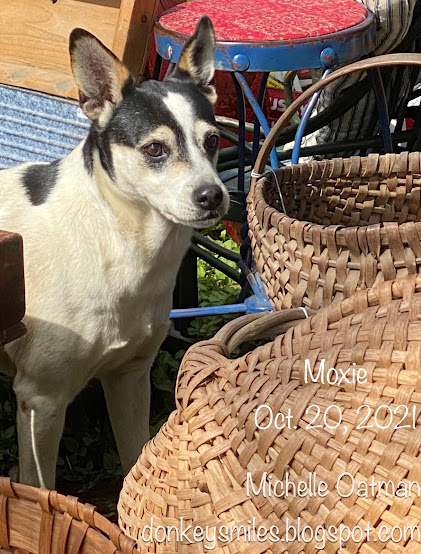 Hubby and I were cleaning out the antique show trailer and preparing for the fall / winter show season. Moxie was "helping" and was just enjoying weaving all around the merchandise to see if there was anything she might enjoy. Laying on of course. I made sure my antique quilts were out of her reach or jump. I know she would have loved those. But she settled to rest between the baskets. Such a pretty girl! And it was a great pose for a photo shot too!

Hope you got a smile this week again - Animals love visiting you! Have a very blessed weekend

Pretty baskets for Moxie's photo shoot.
Those boys do Look stinky! Our old boy dog would find the smelliest stuff to roll in, it is a guy thing .... LOL

So cute. I love it so much.
www.rsrue.blogspot.com