Howdy - Still working on my Christmas Cards... yea I know Christmas is coming... man I am late this year! Honestly it just hasn't felt like it as close as it really is. I don't know if it is the weather, or that we have just been so busy. Heck I wrote October on a check last week... seriously!

First photo today is one of my favorites - You think this is a little love from Tuco? 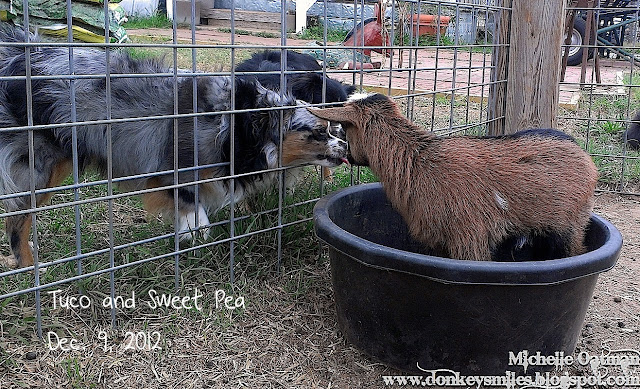 Honestly Tuco was probably trying to get a taste of the Goat Lick that is in that bucket. Those buckets are solid black stinky and sticky mineral and vitamin gunk. The babies like to stand on it while licking them. That bucket is actually just about gone, they got a new one that afternoon. Sweet Pea was enjoying her vitamins when Tuco and Chica decided to say hello. Tuco actually got a pretty good "Kiss" of Sweet Pea's lips... and a taste of the lick. 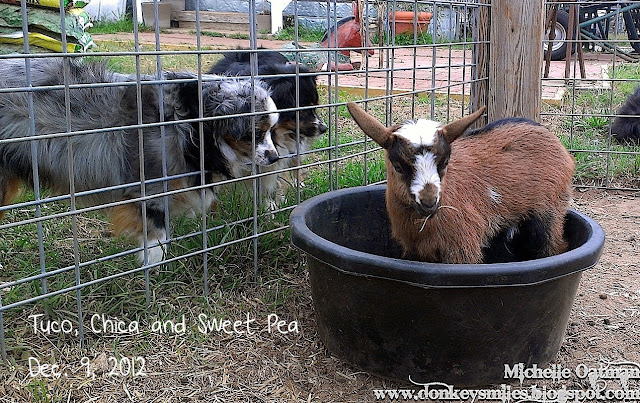 She flew out of the bucket and to Bella as fast as she could just after I snapped the photo. Too Cute!

I think I told you last week that we doubled the size of the goat pen last week. Was fabulous to open up their area. But best of all was to spread out the "men". Cleatus and Peso had neighboring pens before,  after a few weeks... they had adjoining pens. They actually beat their way through the panels and then were going back and forth between the wall and causing a lot of trouble. The noise was unbelievable with the head banging, fence banging and the screaming.

Now the four boys are pretty spread out. Cleatus is the farthest out... as he is the instigator in most of the trouble. As they opened up the pen and built Cleatus's corner, Hubby and the great guy that works for him from once in a while decided that they could just let him out of the old area then work him towards the new pen. I didn't think it would work, but "they knew better" ... I was lucky to snap this photo as I was laughing so hard at them I could hardly stand. 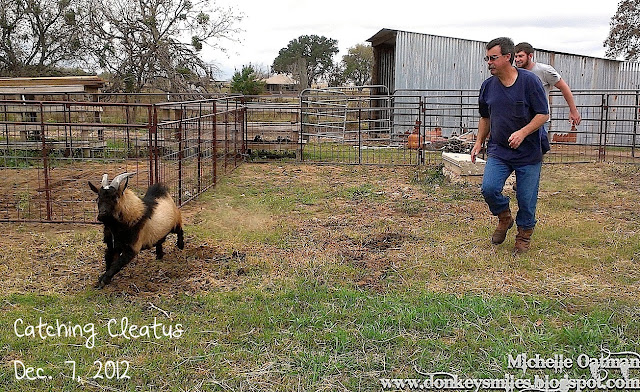 They chased poor Cleatus forever! He would out run them... they would corner him... then he would jump over a hut or run through their legs or run around or between them. Or he would just run towards them and nearly knock them over. It was hysterical. Saying I Told You So was not even necessary. But I do think I said it anyway. LOL  They finally did catch Cleatus, it took both of them to get him into the pen and close it up. Cleatus was not a happy camper at all. He yelled at us for days. He has now settled down. He even has a new "Dogloo" hut and a climbing bench to play on.

Here is the pen just after we opened it up and let all the girls and kids into the new area.

They didn't hardly even care to take a look at the new additional huts that were built for them. Nope they went straight for all that long grass that Hubby was letting grow up for them. I don't think they said a word for hours... Oh and the grass... it was eaten down in a couple of days. So glad we got it done last week and they did get to eat it all, cuz it froze here a couple of nights... so it all dead now.

Here is a photo from the old fence line. You can see one of the old pipes from the fence.... concreted in and was the only one that they couldn't get out. Hubby one day will use the tractor to pull it, but for now it works to tie one of the climbing benches on. They knock those things over all the time, this one ain't going over now! 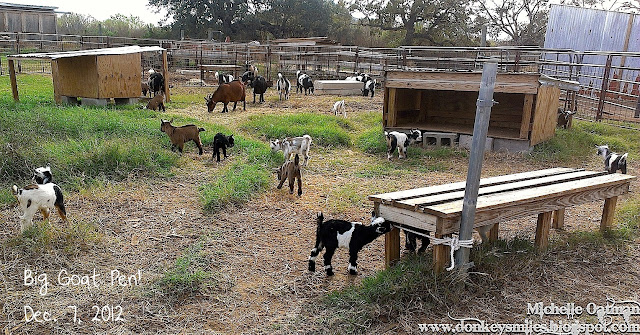 Love this photo... Look at all those kids roaming around. Man it was loud when I snapped it. Moms were busy with the new areas of grass.. kids were talking like crazy trying to find each Mom... then they would find something new to capture their attention for a few minutes and forget that they lost their Mom. They are too funny.

Peso wasn't thinking anything was funny... He is reserved compared to Cleatus. Don't get me wrong he can cause an uproar too. But on his own with out his partner in crime, he is much calmer, quieter and studies things around him. Here he was really watching all the Girls heading out to the new area. Wish he could have gone too... but too many of them are his daughters, so we can't let him mingle. 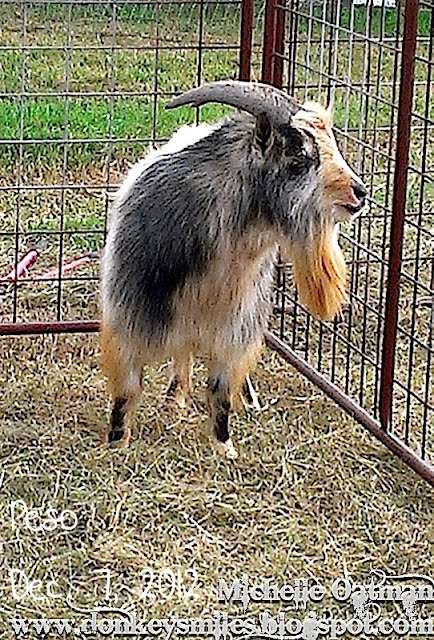 Hubby put in new licks and a couple of mineral blocks this week. Here is Chloe teaching Leiah what a mineral block is... 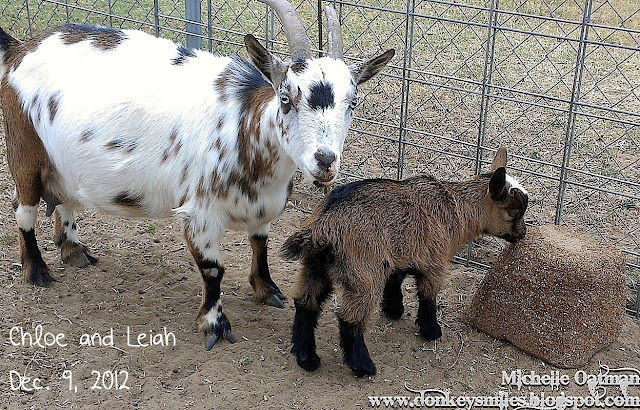 Not that she needed to be shown. As soon as she got one taste she knew it was something good.

I found Lucy watching over her triplets. 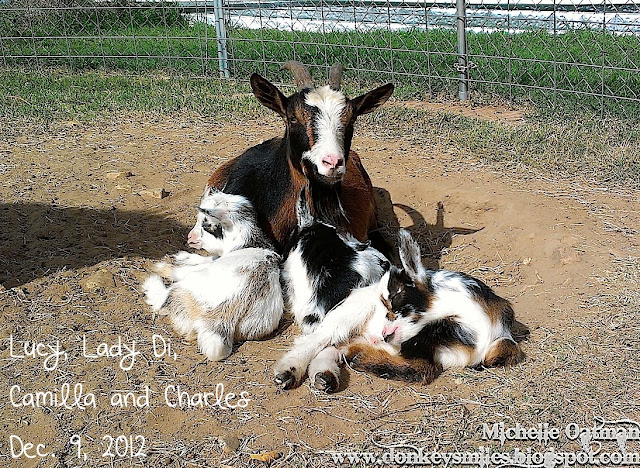 We have two Mom's that are super over protective. And they don't let their kids get too far with out giving that little grunt to return. Lucy is one and Annie is the other. As the kids are getting older they let them get a little more independence. Love this afternoon nap shot. Kills me how they sleep with their necks flipped backwards, makes my neck hurt just seeing them like that.

Last photo is one Hubby captured one evening before feeding. Just how many baby goats can you get on a picnic table? 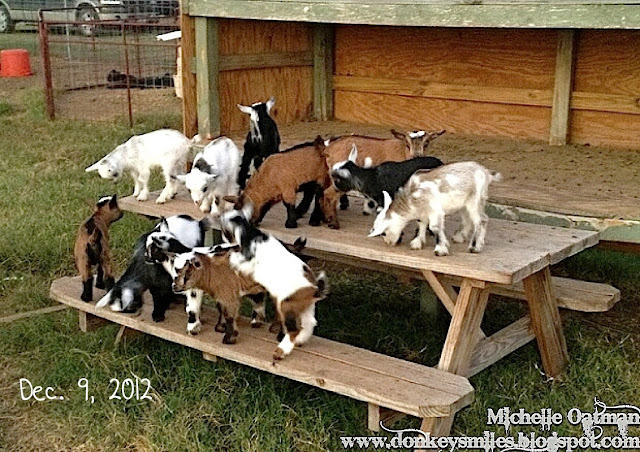 We counted 12 here. They were having a picnic party and a ton of fun let me tell you! LOL ( Edited: after seeing my post today Hubby asked me to make sure you all know that we do not eat on this table, it is strictly a climbing toy for the goats) :0)

Hope you aren't getting bored with the goats... so much going on with them lately. Donkeys they are just grazing and enjoying the cooler weather. But I do need to get out there and snap a few of them for next time.

Better get back to my Christmas Cards. Then you think I should start my Christmas Shopping? I have not one thing. Good thing I don't have much to get this year. Family has decided to cut back, so mainly just for the kids is all I need to do. Thought about stopping the other day while we were in town. But the idea of Hubby going into the toy store with me gave me a scare, so I was ok when we ran out of time. LOL

Hope  things are more organized and done for you! Have a great weekend!
HUGS and

Posted by MichelleO at 3:00 AM

Terrific photos, especially the one of your hubby chasing Cleatus & of course, the gorgeous Tuco. Lovely to see all the babies enjoying the new space & the picnic table.
Have a great weekend, good luck with the Christmas preparations, I finally finished my cards an hour ago. Nothing else is done, unfortunately.

LOL, love the Cleatus Chase photo! (How could you NOT say I told you so?) Boy can I relate to having a hubby in a toy store being a scary thought! Have a fun weekend, hugs...

Tell hubby we already knew that about the table. LOL! I especially love the photo of the mommy and triplets. Hugs!

Oh I love Sweet Pea and the dogs, so cute! Hubby trying to catch Cleatus is a superb photo and it would have been great to be there to see it! Lucy and her 'royal' triplets is gorgeous and tell hubby why don't you eat off that picnic table? You already have 12 hungry mouths there ready to eat LOL! Husband + toystore = disaster...
E.M x

Oh I love Sweet Pea and the dogs, so cute! Hubby trying to catch Cleatus is a superb photo and it would have been great to be there to see it! Lucy and her 'royal' triplets is gorgeous and tell hubby why don't you eat off that picnic table? You already have 12 hungry mouths there ready to eat LOL! Husband + toystore = disaster...
E.M x

Wonderful photos, thanks for sharing all your critters with us. It's such fun to watch them grow.

I think my cards will be New Year's cards. Or, since red appropriate, maybe Valentine's Day. I'm just a little behind??

Thanks for sharing all those lovely pictures and your story. You're not the only one who thinks Christmas is still far away. Only got my cards out today. The tree and decoration still has to be done. Maybe I will let it stay till Easter, so I can at least enjoy it for some time ;-) Wishing you already lovely holidays! Hugs, Helen