Howdy -
We will are still holding at 14 kids here. Now when they are all out and playing it looks more like 44! We were trying to count them yesterday morning. I like to do that just to make sure no one is missing. And I bet we counted 10 - 15 times! They were everywhere! But man they are fun to watch.

We are now starting to see personalities. Love that. And it kills me when one of the boys is turning out to be stunning and has the friendliest personality. Cuz we all know I can't keep boys. Well except for Hank from last Spring... LOL.  But let me tell you... Hank has a brother now... His Mom Lucy had triplets this time, Charles, Lady Di and Camilla. And Charles - well I think he is gonna be just like Hank! He is adorable, super playful and looks like he is gonna be very friendly! 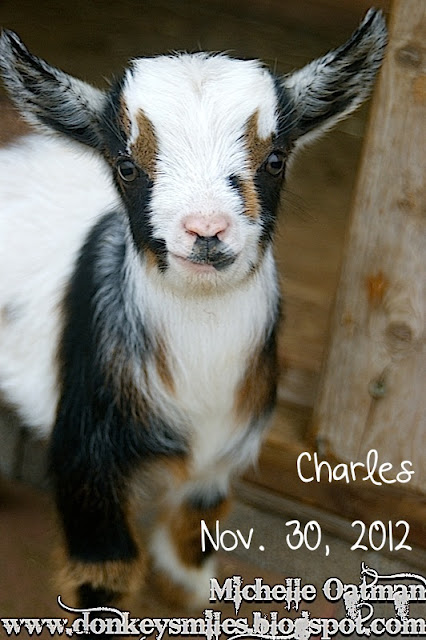 Kinda looks like he is smiling doesn't it? LOL Love the marking on him. Those red little horns just kill me! He is gonna be a hard one to loose! You think maybe I can talk Hubby into a "pet" goat? hmmmm

Here is a photo that just cracks me up! Almost two weeks old and the kids have already figured out the table. I could spend hours out there watching them play. Here Charles had figured out the top of the table for the first time yesterday morning. And he was oh so proud of himself! He was jumping, running and dancing from one end to the other. Anytime anyone else would make it to the top he would shove them to the edge and make them jump down to the seat again. It was as if he was putting on a show for everyone and wanted to keep everyone in the audience until he was done! 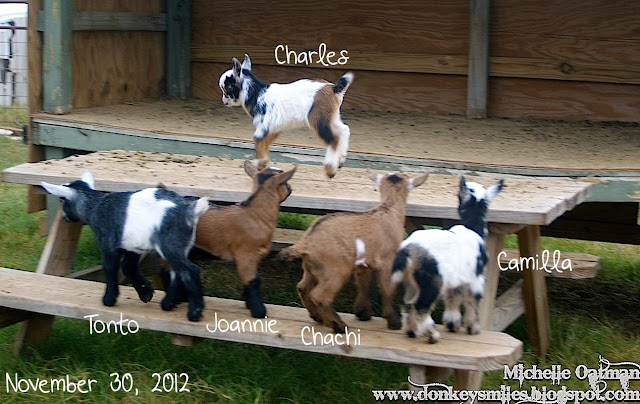 Told you... this guy has so much personality! LOL

I can't believe how fast they are changing though. Climbing already... 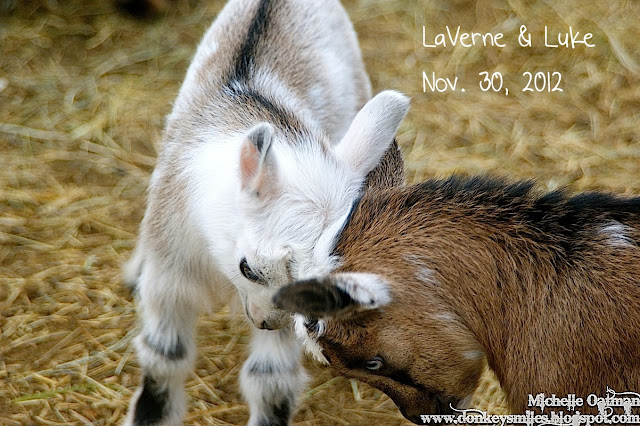 Laverne and Luke were really going at it yesterday morning. Luke is just a little bigger than Laverne, but she wasn't giving in at all! She may be a girl but in the goat world Girls can rule the pen!

They are already copying their Moms and picking up the hay and "eating"... ok carrying and chewing on. 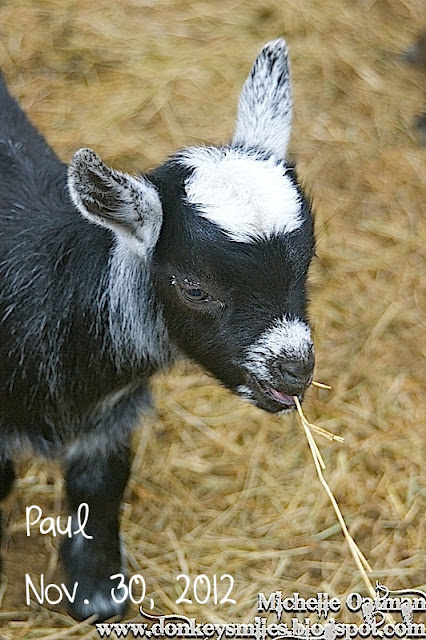 Paul carried this one piece of hay around forever... until one of the other kids took it from him at least.

Here is just plain adorable. Shirley is the smallest of all the kids. She is a cuddlier too. She was my bonding bath baby if you remember last week. 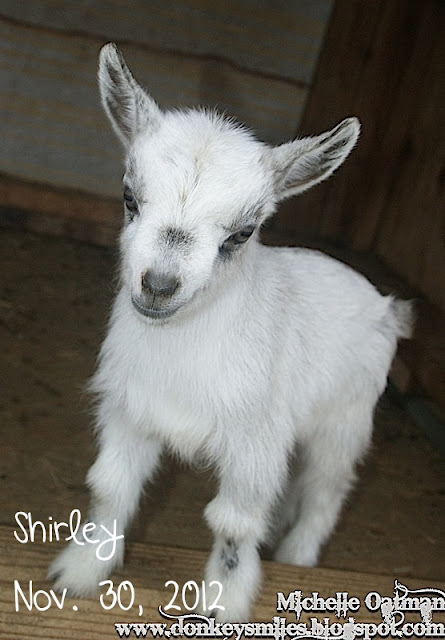 She is just too cute for words. I think she will end up looking a lot like Sandy my bottle baby from Spring. Sandy is her Aunt... yes Aunt. Man it gets hard to get all the genealogy straight in my head sometimes. No worries though... I get it down on paper just in case.. LOL

Another one that is going to be just as sweet is ... well her name says it all. Sweet Pea - 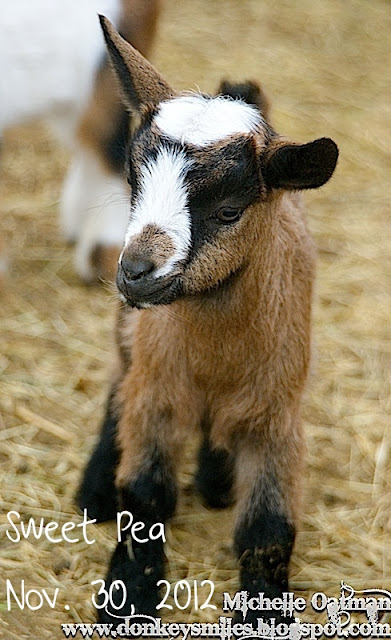 Sweet Pea is the only surviving baby from Belle. Who by the way is doing much better now. We had a few really scary days there with her. I won't lie, for a little while I didn't think she was going to make it, physically and then mentally. But by the middle of the week she was more herself. Except for one thing. She isn't quite as skittish as she was. Belle is one of my pretty but don't touch goats. She never has let us love on her much at all. But now, if I talk to her and move really slow, she lets me rub on her and scratch around on her.  And her baby Sweet Pea, well I held that little one a whole lot those first couple of days. And take a look at her markings, she is gonna be a really striking girl. Darn it.. just wish she had gotten her Mom and Dad's blue eyes!!!!  Genetics just don't make any sense to me!

Tried to get some doggie photos for you this week too... Libbie gets so board with me and my camera now a days. 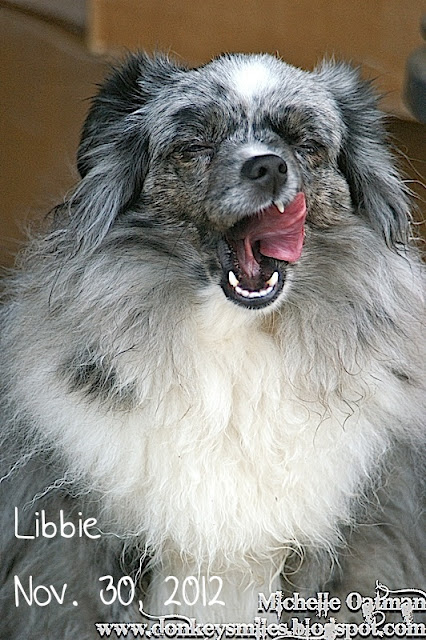 Is that a yawn or what??? Well it was just after 7 am when we were outside yesterday morning, and Libbie does enjoy her beauty rest -

This shot is a little better... 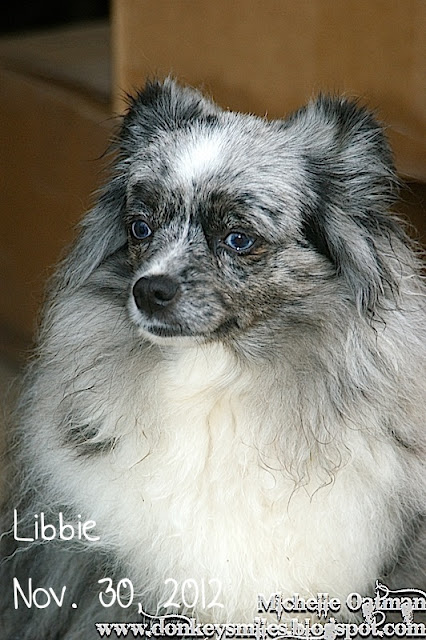 Now Tuco... I would tell you that he was sleepy too in this photo. But this guy he wakes up going 110 miles and hour. Full steam ahead. But by the time I got him to slow down outside and stand still for 2 seconds to snap a photograph. He was already worn out again. It is hard work keeping up with all three of the other dogs, "Dad", "Mom", Goats and the donkeys you know... but he tries! 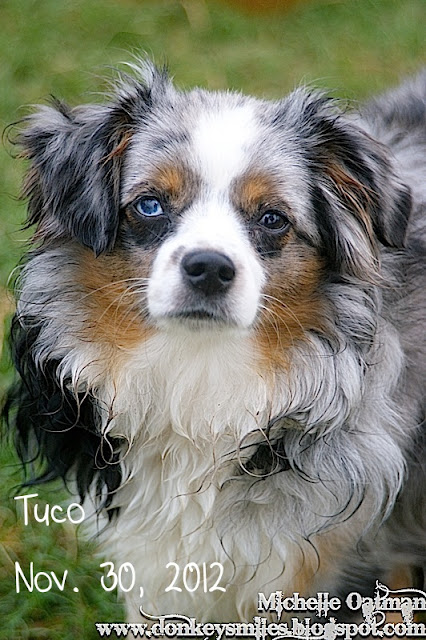 This is his serious face. He has so many facial expressions and looks it cracks me up. But here is also a wet mess!  Autie, Chica and Tuco always come in a wet mess in the mornings. Libbie, hardly ever, she wouldn't allow herself to get messy I don't think.

Can you believe how grown up Tuco is? Doesn't seem that long ago that he was so tiny and weak I had to feed him with a syringe. And now... he is really close to Autie's size.  He is such a love - and handsome too!

Well better run... The Antique Mall we have a booth in is having a big sale today. They said many of the vendors come in and man their booths and help with the crowds. Hubby and I were going to work around the house, but we are talking and thinking it might be good to head into town and do a few hours there.... hmmmm cleaning, chores, computer work.... or Antique Mall and big sale.....

Posted by MichelleO at 2:30 AM

Charles is a looker, that's for sure & Shirley is gorgeous, but they are all gorgeous. I love the photo of them & the table. And in case you haven't got enough to do already, (yeah, right!), maybe a few seconds of video sometime? Pretty please, with bells on? :) It's wonderful that Belle is doing better, would have been terrible if she didn't recover.
LOVE the pic of Tuco, such a handsome boy with those gorgeous curls.
Have a great weekend.

Great pics! Have a fun day. Your comment made me giggle...reminded me of counting kids on the playground at school. lol.

Charles already rhinks he is KING, king of the table anyway. He sure is HANDSOME. Tuco is pretty handsome too. He did grow up fast. All babies do in my opinion. Too Fast. One day a baby the next a teen!!!! Have fun at the Antique
MAll.

Fab post and I love seeing all those babies. I know I've said it before but there's nothing cuter than a baby goat... well I suppose there is. A bunch of baby goats!
The dogs are gorgeous too.

Do you still sell the goats? I am interested in buying one for my daughter. I tried to call the number on your website but couldn't get through.

They are sooooo cute! Great pictures of everybody. Hope you had a great time at the Antique Mall and sold more than you bought! LOL
R/