Now for this weeks Animal Crackers I need to explain to those not in or from South Texas. IT DOESN'T SNOW IN SOUTH TEXAS. Ok well it has snowed here… last time measurable snow that was in my lifetime… 1985!! So when it snows you see it in the sky it hits the ground and melts. So when it started snowing just after dark Thursday night we were on the back porch watching and enjoying… then we realized it was getting harder and actually starting to pile up in a few places. Suddenly video's all over Facebook of people in Texas going nuts making snowmen and snow angels!

Hubby and I got up just before the sun came up on Friday so we could get some photographs before it melted. And boy did it melt quick.. by mid morning everything was soggy wet and the pretty white stuff was pretty much gone, other than a few shady places. But hey we got over 2 inches here and that was enough to totally confuse some animals that had no idea what was going on. 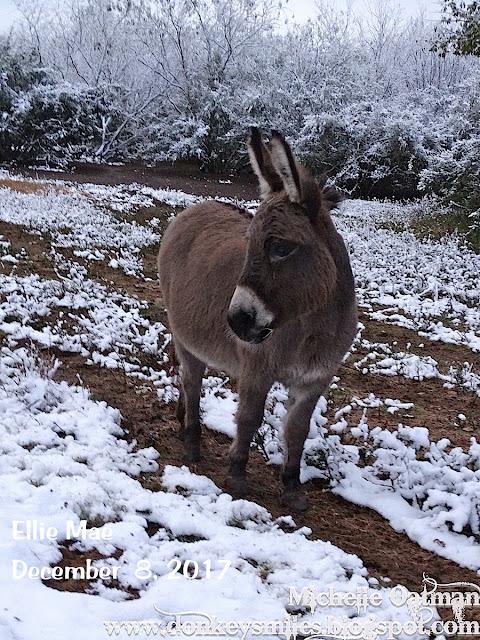 Ellie Mae was watching everyone else to make sure this was safe to be out in. My kids understand rain, understand cold… but this white stuff.. well this just doesn't not make any sense.

Juliet, Gabby and Jolene were walking slowly and cautiously… and lets stay on these paths just in case! 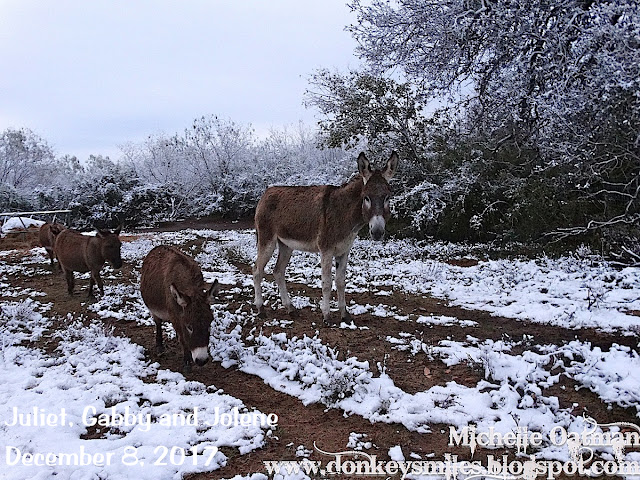 Tried get a photo of Black Jack as he was running and hee hawing like crazy to let everyone know his bachelors pad was covered in this white stuff too!! 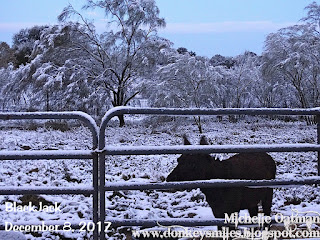 Wyatt and Spartacus now live in the men's goat pen out in front. 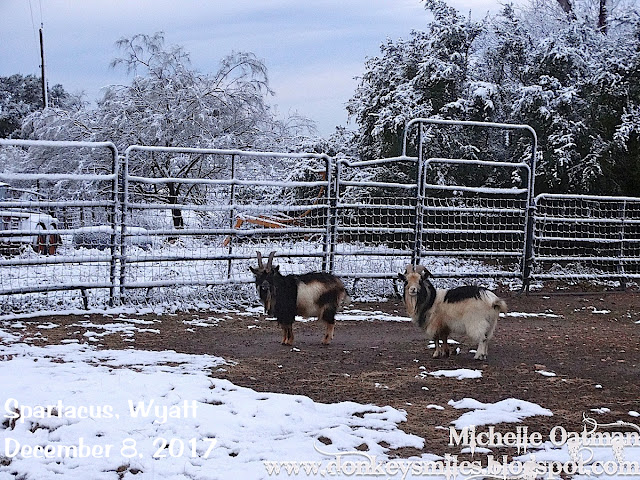 This is the look saying.. can we move back to our old pen as the ground wasn't  and cold there last time we were there!!! sorry boys same conditions there and right now that pen is Doc's.. and he has ladies in there!

The chicken coop was pretty.. 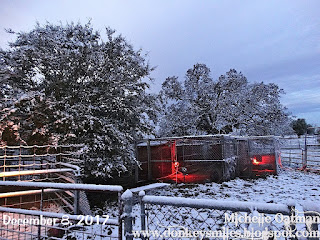 All those chickens were taking full advantage of those heat lamps! And after a few more photos I am heading in to the heat as well!!

The men's Donkey pen in the front pasture… gorgeous! 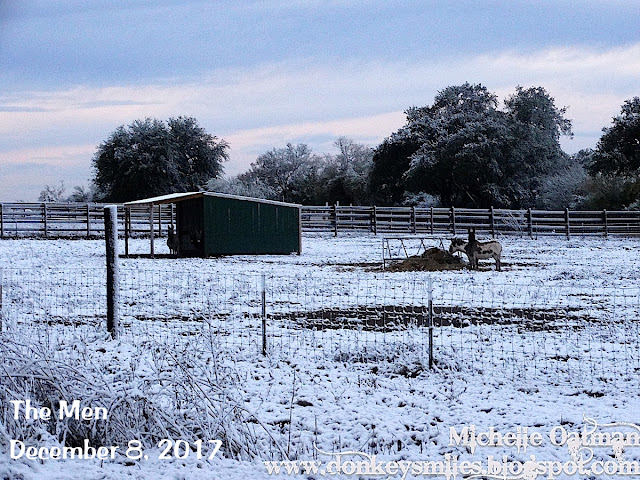 Now a few of the guys were at their bale of hay stocking up some food to build up some warmth. Then if you look close you can see a couple of other guys decided it was safest to stay in their hut… just in case!

Now this is horrible blurry photograph, but it was too cute to not share. Thursday night while it was snowing we let out the dogs… Libbie went to the edge of the porch and said I may be blind but there is no way I am going out there… Chica ran out did her business as fast as possible and ran back up to the porch! Autie… this boy was having some fun! Running around and trying to figure out what this stuff is and where all the grass went! 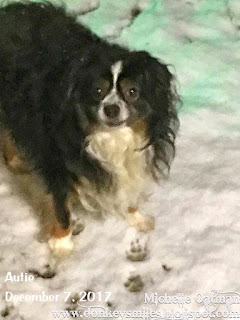 Each time we let him out while the snow was still here he would check out the entire yard and we had to force him come back in. Think my boy was enjoying this odd white stuff!

Ok.. one more photo - was too pretty. This is our road from our gate going towards the house. 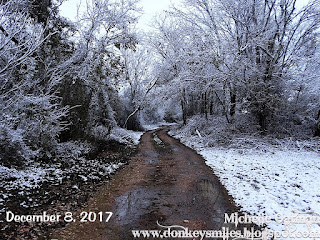 Feet are frozen at this point… I walked down this road and headed back to the house and warmth! Brrrr… Funny… Monday it was in the mid 80's here… snow Thursday night and now by the weekend it is suppose to be back up in high 60's! Texas for ya!

Have a blessed day -
HUGS and -

So lovely to see all the excitement of snow in your area! =) Hee, hee...for me in Austria snow is a MUST for winter time and I feel sad if it is snowing just a little bit. I am wondering how you can make a snowman with this little snow? ;) But doesn't it look amazing? I just love it and I am glad you can explore this feeling! 1985...wow....for me this is unbelievable, but for you it is unbelivable as well! Enjoy!
Hugs,
Martina

I can only imagine the thoughts of all the furry and feathered creatures when the snow started to accumulate!!! I don't know which was funnier, that picture of Ellie Mae with an expression of clear concern, or the story of Black Jack's reaction! I live north or Atlanta, but not quite in the Blue Ridge Mountains so we are lucky if we get snow once a year, and its usually only an inch or two. The forecasters predicted flurries with no real accumulation... yeah, we got 4-5", schools closed after only 2 hours, and the roads were a mess! But it was beautiful!!! We live in the woods and the deer I normally see must have hunkered down somewhere but a turkey came through looking very dazed and confused. We almost thought it was wounded until my husband tried to approach it and it flew up into a tree. I think there were probably a lot of confused critters wondering where the grass went!

Awesome pictures of the fur babes in the snow. We got absolutely nothing but cold temps here in OK. Norman dropped down to the 20's for the first time this year and it has stayed 'cold' since Thursday. Even my girls don't want to sit in the window to catch the sun cause it is too cool against the glass. I read this morning it would be 55° today and in the 60's all next week. Weird weather for sure now days. Norman usually gets its worse weather in late December and January. Last year we had our potatoes in the ground in February. I am enjoying the snuggle down and do some art time.
Vickie aka Okienurse

Absolutely delightful pics! My favorite is Autie and his paw prints. Adorable-thank you so much for sharing.

Loved your pictures of your babies in the snow. I live in Australia but I long for my English Christmases. Doesn't feel the same here in the heat.

Now that is Crazy. Here in Eastern Iowa still NO snow! But when it comes it has a bad habit of sticking around. ;) What fun to see the animals reaction to their 1st snow.