Animal Crackers - What are you looking at?

As I got out there I found it funny that the girls seemed to be staring a hole into the side of the house waiting for "Dad" to come out and feed them fresh new hay. I told them give it up, but nope no one would pay any attention to me as I am not the "feeder" for them. Even Juliet - who is normally a total pushy give me attention donkey. She wanted her "Dad" to come out. 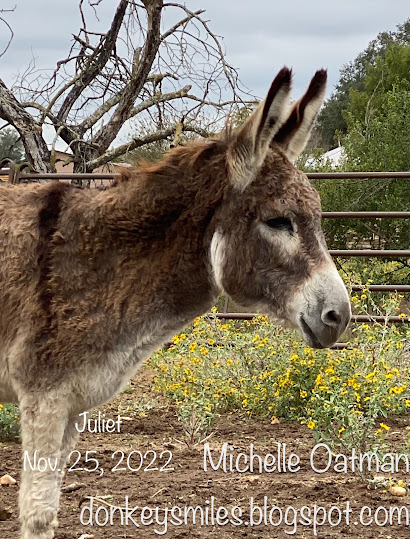 So funny... Here is Patti and Bella staring in the same direction. 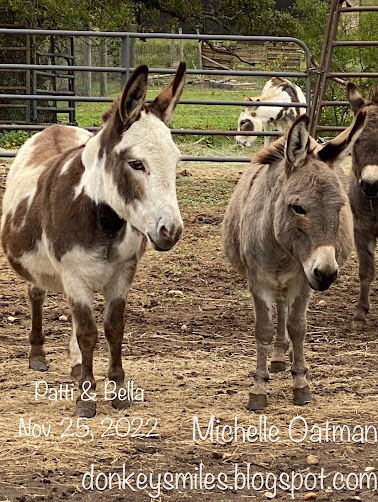 Can you see the same total concentration in their faces?

Pepita same thing. I was trying so hard to get her to come to me at the fence so I could get that one piece of hay off her face. Was really bothering me. But she would not even look my direction. I decided it could stay there cuz no way was I going into the pen - mud was slick and deep. Falling in between all the girls didn't sound like a fun plan. 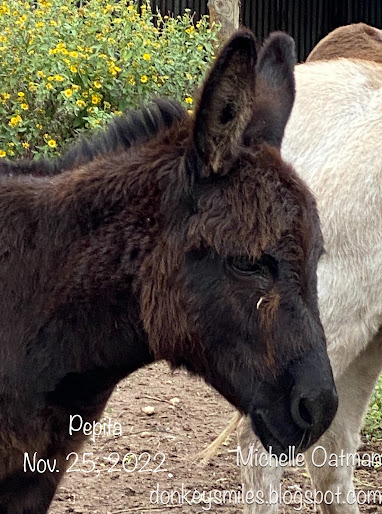 Went around to the other side of the pens and found Ted E. Bear moving fast to get to the back gate, you see if everyone else was looking towards the house there must be a reason so I better get to the gate quick. 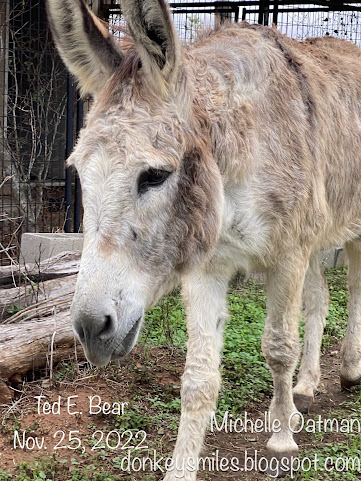 Such a funny guy! Sorry Dad is not coming out right now.

Wait someone looking at me!! 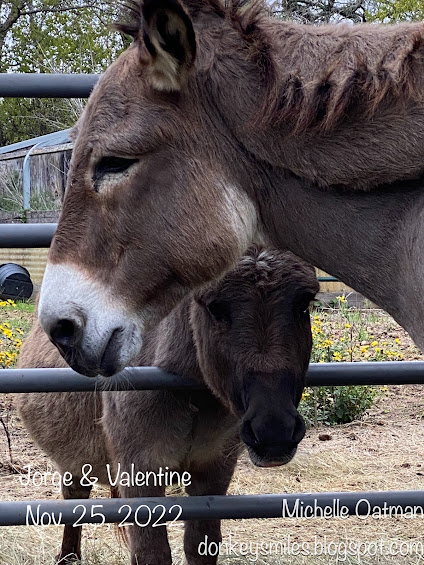 Jorge had to duck under Valentine to see me but he was looking at me. Valentine was trying to sneak bites of Jorge's hay, Jorge was reaching out and saying no, but as I walked up Valentine played the innocent game. Jorge was snorting and looking at me like "You did see that right?" LOL I kicked his hay further into the pen and told him if he didn't make such a mess with his hay and ate it then the wind wouldn't blow in away so Val could eat it! Silly boys!

And then in the house the other day - I snapped this one really quick.. sorry for the glare in the photo. But it was so cute I had to share it. Wish you could hear the little noises coming from all three of these - LOL 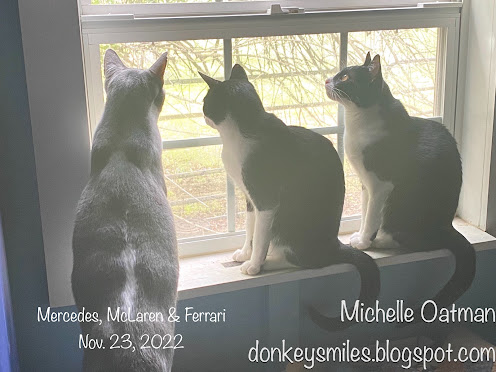 Just inches out the window on a branch was a squirrel. Was making them all nuts! Ha! Nuts...  They were all chattering and so upset that they couldn't reach it. Now honestly they probably would have freaked as they have never dealt with anything that wasn't stuffed or glittered with a bell, that we bought for them. Something that would fight back could be an issue. Now their Momma Cat - she was a serious hunter outside and brought lots of "trophy catches" to the back door before she became an inside cat. I think having heat, cushioned beds and her food put out in a timely manner to her has her happy at her new inside life. These three... talked for a while in the window and then went back to their feathered cat nip stuffed toy. Ha!

Hope you have a smile again - and have a safe blessed weekend. Enjoy family, friends and furry kids!

Hope your Thanksgiving was a blessed day. Even hay prices are at a premium. Sigh. Things have to leave out soon or we are all going to go broke just eating. Oh well I could stand to eat less and shed some excess!

Dad must be a very much loved figure or is it just the food.
Loved the picture of the kittens looking at the squirrel.
Wish someone had a camera here. Our resident lizard was sunning himself and Molly saw him so she racing after him and I’m running after her to try and stop her. Luckily she never catches him.
I think he lies there just to torment her.
Hope everyone are well.
Our Summer starts here tomorrow.
Hate the heat.