I am home... how about some sneak peeks... and some baby goat photos.

Well I made it home! And thankfully the flight home was fine, the weather was good so it wasn't nearly as bumpy and scary as the first! It was also alot shorter! Loved that! Was late last night when I got home, you would think we would have slept in especially as I feel much like a zombie but noooo we instead got up and went out for breakfast, as there is little for food in the house.. LOL Tomorrow I will have to go to the store. Then we came home and bathed the dogs... poor little Autie has some sort of rash or something, he is scratching and pulling out his fur. Just after he was bathed he crashed and is sound asleep.. must feel much better.
Before I show off the goats... how about a card?? LOL yep still plan on showing them on here! I only have one sneak peek for you  - one of the new Penny Johnson images... I just love it. This is Rosie Rabbit... 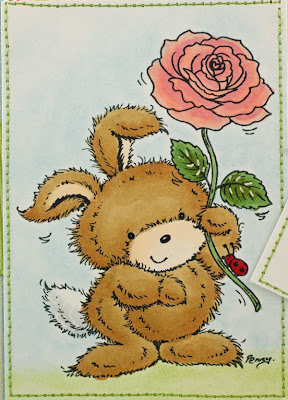 She is colored with my copics - 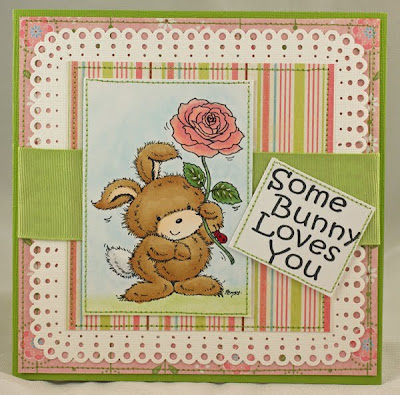 My card is pretty simple, a green Bazzil Bling card stock, with scraps of pink and green papers - I wanted a lace border around the image, love those Martha Stewart corner/border punches, they really are fun to work with. I sewed down everything. For a band across the middle I found a small piece of really wide green ribbon - And then I suddenly remembered this sentiment stamp I have had forever! Too perfect!

Make sure to check out the other sneak peeks at the Stampavie DT/Blog... we are in our 40 days of samples - to show off all the wonderful new Spring/Summer releases!!

Oh my these little ones are too cute for words! So I'll just show off photos... guaranteed to make you smile! 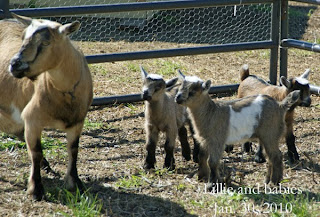 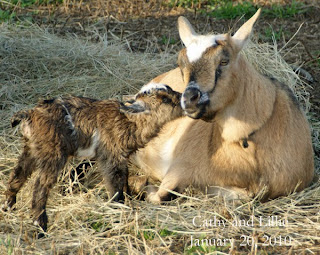 Cathy was born first.. Hubby took this just minutes after she was born... (Jan. 20th) 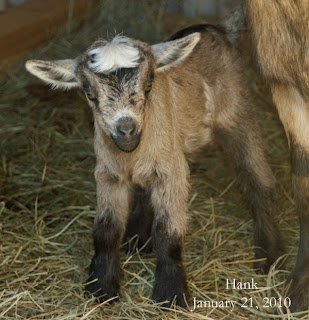 Hank came later... he was very small and very tough birth - they didn't think he was going to survive... but he is really a fighter and is doing great! 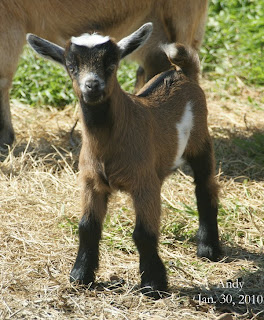 Andy the last one, is the clown... he doesn't walk anywhere, he bounces everywhere! 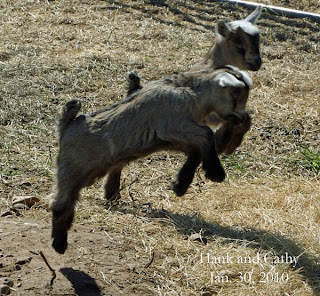 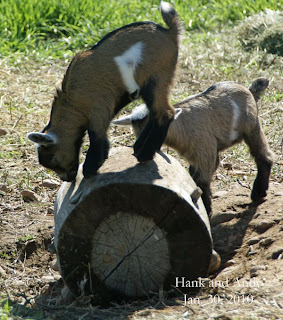 Hubby put this log in their pen today for them to play on.. took Andy just 10 seconds until he was up on top to check it out!
Now we wait for Paintbrush to have hers... she is due February 4th - so could be anytime :0)
Now... I am off to relax... HUGS and

Posted by MichelleO at 2:53 PM

Wonderful pics Michelle. So glad your ride home was smoother. The babies are gorgeous and look so happy and healthy. Hugs Dawn Marie.xx

Gorgeous card, and love your new babies, they look adorable and full of mischief!
Sian
x

Hi Michelle, glad you got home safe and sound. love the pictures of those cute little kids, they are going to keep you bouncing!
hugs, annie x

Love your bunny card and your pictures of 'your' babies! I love goats! I'd have one if I weren't physically disabled and could care for one.

Its so nice to visit your blog again my friend. Its been so long now. I love your work and the photos of the animal is so lovely!

Such little cuties. They are adorable. I've followed your adventures on your blog, sounds like a blast! Clever you with the names of the goats... :)
xMarie

What a beautiful card Michelle,i love your image and papers.
So gorgeous photos.

OMG! These KIDS are adorable!! lol I miss your blog a lot! I was looking at some stamps for a prerelease today on 7 kidscollegefund of Ruffles and remembered you had shown Ruffles when he firsts came out! For some odd reason I am getting NONE of my feedblitz mail. I have no clue why. My 3 yr old gets on my computer to play her webkins and sometimes does stuff she should not b doing on the my computer and I don't know if she clicked off something or what!!! I don't know what to do. But I enjoyed getting your blogs every day. I love your creations and i really love seeing all your cute animals on your ranch!!! I have another email acct. that I rarely use. So I don't know if I need to subscribe under that email to get all my feedblitz email back or what!! Any suggestions?? Sincerely, Heidi Brawley

Michelle, these little guys are adorable as well. I can't wait for video as I can only imagine. Andie looks like such a little stinker!