Howdy - Last Animal Crackers for 2012! Everyone wanted their photo taken this week. I took a whole bunch of great photos yesterday, good thing cuz they are saying the weather is gonna be nasty next week and everyone will probably be hiding in huts.

Leticia wanted to be first this week... and she is so darn cute I couldn't say no to her - 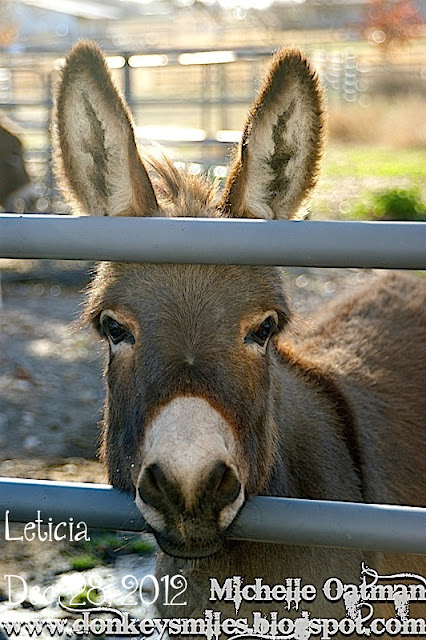 She is our youngest little girl, just over a year old now. And totally gorgeous! She is still very small. Her personality is a total sweetie.

Speaking of very small and sweet - Malory is both as well. 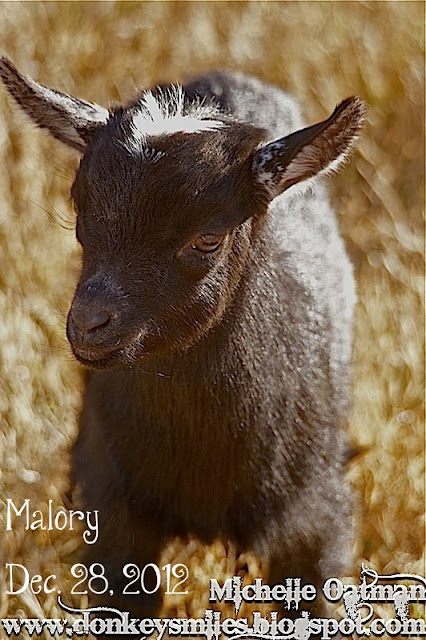 One of Annie's triplets, she is the youngest of all the kids. She is all black except for that tiny little white hat and one white dot on her side. She is very timid, but once you catch her and calm her down she is happy to be held. Just have to catch her first!

Another hard to catch girl - Laverne 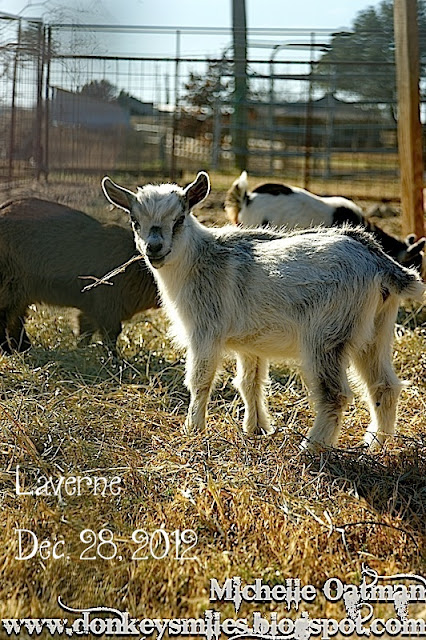 Her sister Shirley is much easier to get a hold of. Laverne is like the speed of light! I bet since they were born we have only held Laverne 5 or 6 times!! I know that doesn't make the sweetest loving baby goats. But seriously this girl is FAST! LOL She is a pretty thing though! She has darker areas coming in. She is gonna end up looking a lot like her Mom Jill and older sister Crissy - but maybe a little darker.

Charles was enjoying it too. 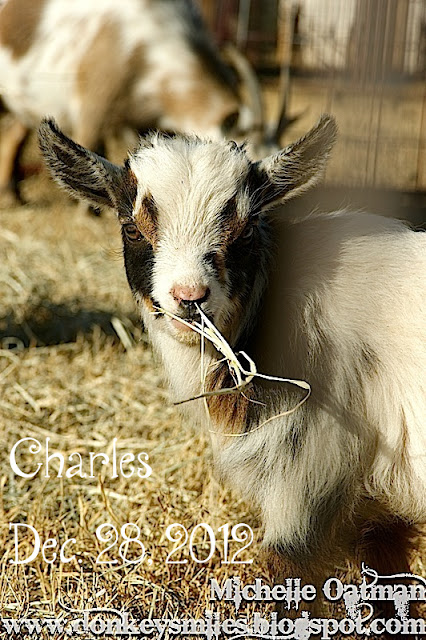 Lovin' this guy - Hanks little brother is what Hubby calls him. That or "Chuck" - I prefer "Charles" he is just too handsome for a silly nick name. :0) He is Royalty! ha!

And handsome.... Pedro is the man! 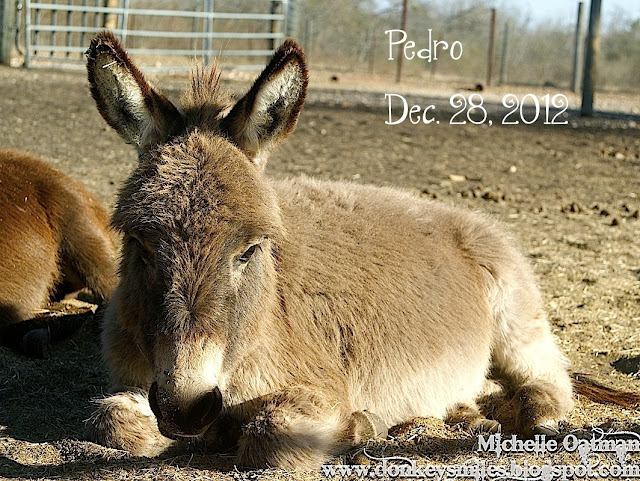 He is settled in the boys pen, no longer the little one being picked on. A few days ago we actually found him chasing Ramon and getting the edge on him pretty good! All of Darlene's boys all end up looking so much alike once all grown up. Diego - Pavo - Frio - and now Pedro. All sweet grey dun boys and all alike.

This was just too funny... Do you see it? 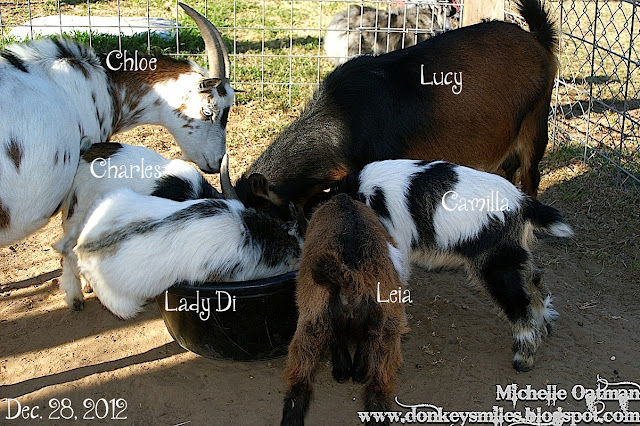 Lucy her kids and Chloe and her little girl were all enjoying the mineral bucket. The kids usually have to get 1/2 in with their front legs to get all the way to the good stuff. But for some reason Lady Di felt that laying on the side was the best way to tackle it!! Cracks me up these kids!

Hubby called me over to take a look into the "Cat House" you see a couple of weeks ago I found pet beds on sale and got a few for the Kitties. He rolled his eyes at me - But...

They seem to like them! Sam was just totally relaxed and looking at me like that snap just woke me up. But Momma Cat.... she is Scaredy Cat and Fraidy Cat's Mom... she has their same personality. I snapped and in that second she was up and hiding behind the door. No worries... I checked later and she had gone back to resting in the bed. 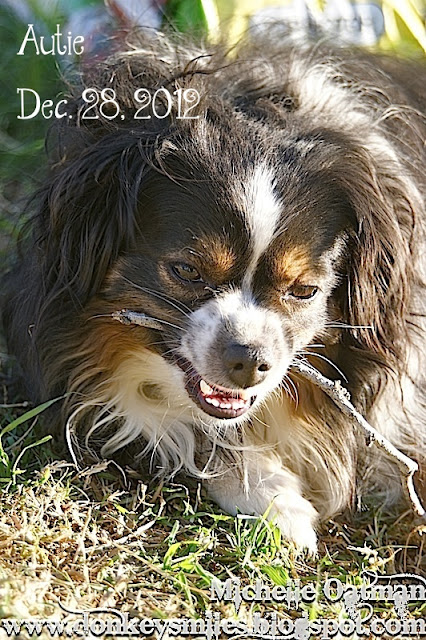 That is exactly what Autie was saying. It was directed to Tuco not me. But I decided to leave it as well! Oh this boy - he is a sweetie, I could take anything away from him and he would never snap. He isn't gonna be a happy camper later today. We are hoping it is gonna warm up enough for baths today. Autie is in desperate need! I hate to bath them too often, especially if it is cold, but Autie is like a little Pig Pen! I am not sure what he has done recently, but his hair is a total mess, and a better smell wouldn't hurt. He loves it once the bath is over, prances with his head up, but then with in a day or so he is back to a dirty little mess. I still love him though :0) He is my boy to the core. For some reason the past few weeks he won't even go out with Hubby unless I say it is ok, or I go to the door with them. He likes being right at my side. In fact as I type this - he is laying asleep across my feet. He is fabulous as a foot warmer let me tell  you! Have I said I love this boy before?

So what is on your schedule to do today? I think Hubby and I are going to meet a friend for breakfast, then heading to the grocery store. No Hubby does not help me with the grocery shopping. He HATES shopping. He will have his IPad and will stay in the car, but then when I show up with the cart he will unload for me, then take them all in the house. So I guess he does his part of the groceries. Then a bit of chores I suppose. Nothing to exciting huh? Hope you have more fun planned than that!

Have a wonderful Saturday!
HUGS and-

Posted by MichelleO at 2:30 AM

Wonderful photos, great to see the cats looking so comfortable. Happy New Year to you all.

Lovely photo Michelle, our two dogs are the same, hate baths but love getting dry afterwards!

Such a fun post this morning and the pic of Lady Di in the bucket just cracks me up! Isn't Autie so gorgeous?

Loving Malory's eyelashes and Lady Di's eating habits. LOL. O.K. Autie I will NOT take a stick from you. Lucky cats! Have a relaxing weekend, too.

Everyone was especially photogenic this week, maybe they knew it was their last photo shoot for 2012! I'm with Carol, I love Malory's eyelashes! Lady Di may be on to something there...Enjoy the rest of your weekend and Happy New Year to all of you!
R/