I know I said I would miss a few days... but SURPRISE!

I know I said on my last post I wouldn't be posting until I leave for my CHA trip this week - but Surprise!!  Hubby and I went out on a "date" last night and when returning home we found a brand new little surprize!! No Annabelle did not have her baby donkey... but Annie had her baby goat! 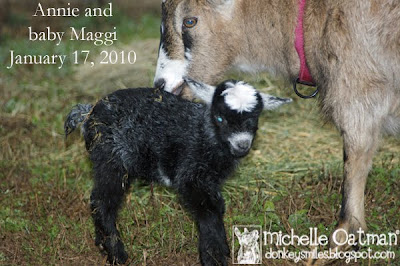 Now you have to understand this was a total surprise, we have been watching Annie's Mom, Lillie with a magnifying glass - I was sooooo hoping that she would deliver her babies before I leave... and when we found the baby in the pen, first thought was Lillie was having hers!! YEA!!! But then after a couple of minutes we realized that the baby wasn't Lillies... Annie was the one that had it, and she was being such a good Mom!

She is a first time Mommy - she was not huge pregnant, and really the breeder thought February on her - so we just were not looking at her anytime soon. But I guess there was an oops in there with her... :0) Only one baby for her, we are expecting at least two or three for Lillie as she is huge - but let me tell you, this little girl is adorable!! And because Annie and Lillie were not bred to Frankie.. we can keep this little girl! :o) YEA! 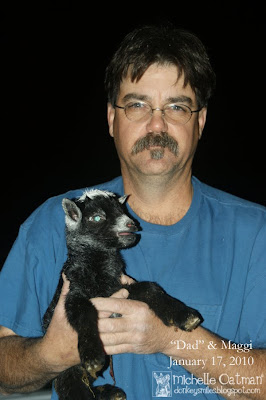 Of course "Dad" had to have his day one photo taken with the baby. Now he is going to hate this photo,he looks totally worn out - but it was late, and we had been on a nice dinner and then came home to having to baby proof the pen and build a new dividing fence in the pen. (He had that planned for today as we thought Lillie was getting so close)  but Surprise! We built it all and worked in the night to get things safe and ready! 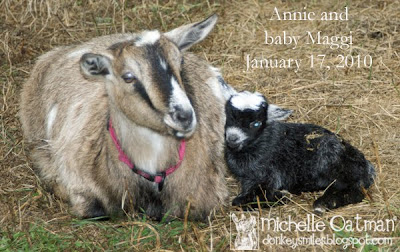 And this is how I found Mom and Baby this morning... how cute is this? We named the baby Maggi  and why you ask. Well we figured that since this was our first "date" in a while and we were out when the baby was born eating at Maggiano's Italian Restaurant that.. we should include that in her name... So Maggi was perfect!

We are still watching Lillie - she looks really close, I still have hope she will deliver before I leave on Wednesday morning...

I'll be posting my trip while gone, and will be including some sneak peak cards of the new Stampavie images :0) So I do hope you will pop in and visit me!

Posted by MichelleO at 8:58 AM

Email ThisBlogThis!Share to TwitterShare to FacebookShare to Pinterest
Labels: Goats

OH how sweet, who would know a goat baby "kid" would be so cute! Love the picture of them laying down together. You guys are such awesome "owners" and take such good care of your animals - making it baby safe after a date late at night - kudos :)
hugs,
Lori K.

What a cutie - she's adorable.

How cute! What a perfect name for her!

Ohhh, how totally sweet is that, and so tiny! Hubby looks great, btw, tell him not to worry. We females look at the baby anyway (not to say hubby is hard to look at, but baby anything surpasses for me, anyway) : ). Congrats on your new baby goat, and glad you get to keep little Maggie. Cute name.

Congratulations, she is adorable, really small and cute. The same suits her well.
Glad you had a lovely evening and fingers crossed for Lillie.
Sian
x

I think I want a goat too, not only donkeys. Such an adorabel baby girl. Congrats!
xMarie

ooo how darling and what a wonderful surprise!
hugs, annie x

Congrats with this beautiful little lady, she's so cute with her white hair!! Yvonne

Maggie is adorable, love the white patch on her head. I wish I could have her.

How cute, she is gorgeous x

Congratulations on your first baby kid...there's nothing as cute as a baby goat...glad we are having some nice weather to welcome Maggi into the world...and I also love Maggiano's...yum yum...have a good time in California.

Congratulations, this was so much fun to read and I love how you chose your new babies name, very clever

Aww, she looks so teeny tiny in your DH's arms. So glad you got to see her before your trip. Hope all goes well with Lillie, too. Please give her a snuggle from me. Kelly :)

Michelle, how cute is she, so adorable, can't wait to see Lillies babies and I hope you enjoy the CHA. Hugs Jo x

The new baby is too stinkin' cute! Such a great name!!! My hubby and I had a long awaited date at Maggiano's too! Nice place, hope y'all had a good time! Have fun at CHA!!! :)Cheri