Well are calling him "Lucky"

Cathy went into labor late Monday night - her first batch of kids. Sadly her first two babies did not survive. We think they were possibly a little early? The third of the triplets is doing great though! He is TINY TINY TINY... (this is one of a few reasons we are thinking they were born a bit early) Tiny but totally adorable! We have named him "Lucky" 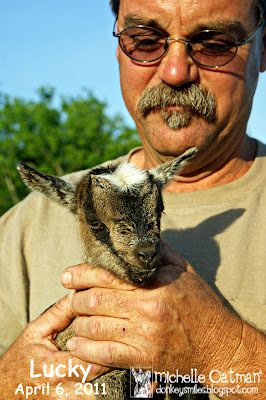 All though Craig was naming off the guys from the band Kiss with those facial stripes going there! But he is too sweet for a rock band name - He really loves to be held, and cuddled. Mom is one of our psycho goats. She won't let us her touch her at all. I am not going to let this baby be this way. Despite her grunting while we hold him, we are going to make sure this little dude likes attention and people! 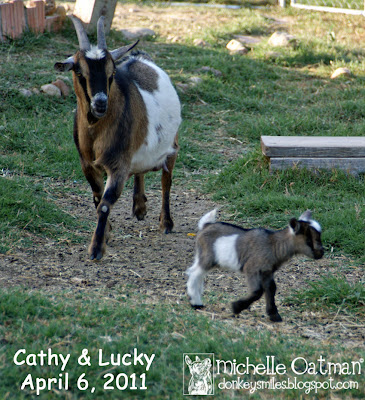 Cathy is going to get her exercise with this one though... I think he is going to be an active one... I'll have more photos of Lucky on Saturday's Animal Cracker Post :0)

Have a great Thursday!
HUGS and-

Posted by MichelleO at 8:02 AM

SO SWEET!!!!!!
Thanks for sharing.
Hugs Ageeth xx

Congratulations on your new arrival! I'm glad to hear that one of Cathy's baby's survived! Thanks for interrupting the regularly scheduled week with the wonderful news!

whow so sweet!!! sorry to hear from the other two!! you do a great job!!!
xx petra

So adorable.Made me smile for today!

It's very sad that two of Cathy's babies didn't survive, but a big welcome to the world for lucky, he is adorable.

What a lovely guy! Congratulations with this new furry baby! Hugs, Yvonne

Isn't he cute? And such a fitting name for the little guy too! I didn't know goats have 3 babies..

Hi Michelle, this little dude is too cute. Sorry to hear about the other two babies. Can't wait till Saturday. Hugs.

What a sweet fur baby and so small. You know if you tame him to people Cathy may start following his lead. We had a pig years ago that was mean...she had a litter and one of the babies decided he was a dog and followed the dog around to the point of wanting to come in the house and lay on the sofa! We let them out during the day like the chickens and at night put them back in the pen. Red was always with the humans and soon mom and some of the siblings started coming round too! They are so smart! Thanks for sharing the new birth with us. Looking forward to Saturday! Vickie

Awww,Lucky is gorgeous!!!
Give him a cuddle for me :o)x

What a sweet little face!
R/

Sorry to hear they all didn't make it :( He is simply adorable!